Quite different from “musical comedy,” humorous music is in very short supply these days. Sure, there are “morning zoo” radio shows that still create old-fashioned parody songs based on timely events; there is the sole mainstream exponent of novelty tunes (Weird Al, whom I will defend against all naysayers); and there are also songwriters like Randy Newman, John Prine, Lyle Lovett, etc, who write darkly funny tunes as expertly as they compose heartwrenching ballads. A singer-songwriter who exclusively writes and performs humorous material is a rare bird indeed, but there is one Australian gent living in London who fits that bill superbly, and his name is Tim Minchin.

What Minchin does harkens back to masters of wordplay like Tom Lehrer and Noel Coward, except that Minchin is a self-professed “rock ’n’ roll nerd” (who has written an autobiographical song with that title). His music demonstrates a pretty thorough knowledge of piano-centric songwriters past and present (he’s namechecked Elton John, Stevie Wonder, and Ben Folds in his work, among others), and he shares with the comedy-music deity Lehrer the ability to convey a smart social or political truth in the form of a few verses and a chorus. Example:

Minchin clearly possesses the ability to write catchy and touching serious music — see his gorgeous atheist-Xmas tune (below) — but he has instead decided to use his talent to amuse. Before his present incarnation as a performer with a striking appearance (he performs barefoot, in eye makeup, and his “ginger” hair teased) and a strange stage persona that moves effortlessly from impish to positively demonic, he worked as a cabaret-style singer-pianist and also acted onstage in his hometown of Perth.

Minchin started gathering a following at the Melbourne International Comedy Festival in 2005; he won the “Best Newcomer” award at the Edinburgh Fringe in the same year. He has since mounted various one-man shows and also, from what I’ve seen on YouTube (since we Yanks are “locked out” of the BBC website’s streams), has appeared with some regularity on British and Australian TV. He also was involved in an Oscar win at this past ceremony, as he narrated the Best Animated Short of 2010, the Australian short “The Lost Thing.” 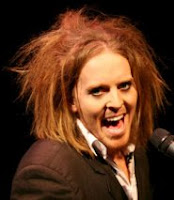 Although his stage character seems “uncertain” of what to say at times, Minchin the performer is in complete control throughout his shows. He does intersperse short standup routines (including this crazed piece about anger) in among the tunes, and is in fact quite good at it, but his songwriting is so vibrantly creative that you come away from watching his stuff with his melodies lodged deep in yer brain pan.

I only discovered his work a few weeks back and was delighted to see he’s traveling to America in May to play several dates, including three in NYC that… have already sold out! I’m not sure how he’s acquired a cult over here — either it’s word-of-mouth among Aussie and British expats, or due to an appearance on Conan O’Brien in January of this year.

Before I move on to a survey of Minchin songs that you should definitely check out, I should underscore the two elements of his work that I most enjoy. The first is his ability to deconstruct himself and his persona in his lyrics and performance; the second is the aforementioned ability to convey a deeply held belief through the vehicle of a “funny song.” Come to think of it, the best subversives always have a good sense of humor….

****
Let me start off my mini-survey of Minchin’s music with my fave item from him (besides the above-linked ditty), his discourse on religion entitled “Ten Foot Cock (and a Few Hundred Virgins).” This is a clever, tuneful piece that speaks for itself:

The most commonly used topic in songwriting is, of course, love. Here, Minchin directly addresses his lover and comes straight to the point (in an actual music-video!):

In case the lady wants Tim’s “Dark Side,” he’s willing to reveal it in this brilliant piece that bounces genres from jovial piana-playin’ to introspective Pearl Jam-mish angst:

An open challenge by Minchin to religious folks, believers in psychic phenomena, and new-age therapies that finally works its way around to its subtitle (which is a variant on Henny Youngman’s most famous punchline):

And this may seem weird in April, but I wanted to close with the Minchin song that first “hit” me, his serious Xmas song about what really matters about the holiday and what doesn’t, “White Wine in the Sun.” I avoid sentimental holiday music like the plague, but this song appeals to me greatly because it’s genuine and not mawkish:

Those who are intrigued by the above can check out mucho Minchin on two YouTube channels, one put up by a dedicated fan who has collected some great TV appearances and the other put up by Tim himself.

FOOTNOTE: In praising Minchin, I neglected to mention two other practitioners of musical humor whose work I love, the multi-instrumentalist Bill Bailey and the acoustic master of wonderfully funny folk-rock tunes, Stephen Lynch. The work they do is equally impressive in this era when there ain’t any humor at all in popular music.
Posted by Media Funhouse at 1:26 AM

And Dean Friedman???? Check out Death to the Neighbours and I Never Really Liked You Anyway, for starters.