Some thoughts on Jerry Lewis 'retiring' from the telethon

I knew the day would come, but I figured it would occur after Le Jer had shuffled off this mortal coil, or else I had. Although I’m around half his age, I fully expect Jerry to outlive me and many of my middle-aged friends (“Le Increvable Jerry” — the indefatigable/unkillable Jerry — was the French title of The Disorderly Orderly).

It was announced a few months ago that the Labor Day telethon would be reduced from 21 hours to a mere six. This came after the 2010 show was a mind-blower, reverting back to the crazy show-biz glitziness and eclecticism that had made the telethon a must-see event from the mid-Sixties through the late Eighties.

Most interestingly, Jerry did not publicly comment on the show being abbreviated to the length of the Chabad telethon, or an all-night marathon of CSI or Law and Order episodes. It was obvious, though, that he was not in favor of this decision — check out the official MDA USA press release and notice that Jerry’s name is mentioned nowhere in it, except in a reference to the famous moment in 1976 when he was reunited with Dean!

So when Jerry remained silent, it was obvious something was up. But the announcement that he is “retiring as host” of the telethon this year was still something of a surprise because, as has been noted before, he’s one of the only individuals in recent memory whose name has been inextricably linked with a disease that he’s never suffered from. (Lou Gehrig, Damon Runyon, etc, died of the diseases that were named after them, or had charities created to battle the condition that killed them.) 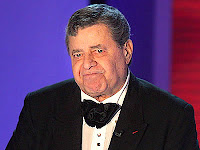 One can speculate what brought about Jerry’s “retirement.” Is he not feeling well enough to run a six-hour program? (Highly doubtful) Were the politically incorrect comments he has made over the past few years — from referring to those afflicted with MD as “cripples” and “half a person” to his casual dropping of the word “fag” on-air a couple of years back — responsible for what looks to be an ousting from the program? (Possible) Or did the MDA want to move away from Jerry’s old-fashioned “pity-based” fundraising method and go for the new, star-studded model embodied by the various quickly-put-together natural-tragedy fundraisers, or the snarky-but-sincere, multiplex-hip “Night of Too Many Stars” on Comedy Central? (Very likely)

Whatever the case may be, I’m sure this year’s ’Thon will be packed with emotion as Jerry signs off — presumably lots of celebrity talking heads, as was the case with Larry King’s last weeks on the air. But what will we, the viewing public that remembers classic variety shows and deeply craves pure, undiluted kitsch, do once Jerry folds up his tent and the “new telethon” appears in place of his annual extravaganza?

The Jerry Lewis telethon (muscular dystrophy is still part of the program’s official name but it was subsumed by Jerry’s moniker at some point in the Eighties) has been a TV tradition for the past 45 years, a frenzied end-of-summer broadcast that always signaled the return to school and fall weather. It has also been Lewis’s premier platform since his films lost traction at the box office in the early Seventies. Most importantly for those who care about such things, it has been the last bastion for “old show-biz” — Jerry has been the last host who would bring on Sixties nightclub acts like Jack Jones and Norm Crosby, and he definitely offered the last national platform for beloved shtick-meisters like Charlie Callas and Henny Youngman.

If the “unseating” of Jerry as host (I’m going to assume that is what happened) was what the MDA needed to be able to raise more funds for those who suffer from neuro-muscular diseases, then it was the right thing to do. It does qualify as a loss, though, for those of who did watch the program each year, wondering as it wound on exactly what the hell would happen next. (If any of you haven’t yet detected “the common thread” in everything discussed in a positive fashion on this blog and on the Funhouse TV show, it’s that the unpredictable is what unites the “high” and “low” in art and entertainment. It’s what makes things interesting….)

The telethon has been, by turns, tacky, touching, boring, exciting, ridiculous, entertaining and — often in the early morning hours when the weirder acts from Vegas came on — downright surreal. One year a gentleman came on whose act consisted of nothing more than squishing his face against a sheet of plexiglass, inflating his mouth while crossing his eyes and such — the kinds of things a kid does against a car window. Somehow this was the man’s talent, and he was on the ’Thon. I’m gonna miss those moments!

For those looking to celebrate the Jer’s reign as “king of comedy” and King of Telethons, here is a fan site I had found under its original domain name (which was impossible to remember), and which has now reappeared under the very memorable name “Italian Jerry Lewis” (meaning it’s been put up by an Italian fan of Jerry’s). Check out this gent’s trove of Jerry memorabilia here.

******
And because I have lionized him on the Funhouse TV show for the last few years, I have to bring up Tony Orlando, who has served as the host and driving force behind the NY/NJ arm of the telethon for most of the 2000s. 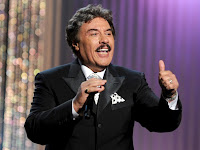 Tony is an old-fashioned performer who will kill himself onstage (metaphorically) to entertain you. He mixes his own Seventies pop hits with Sixties AM-radio classics, doo-wop, salsa, mock-rap, and outlandish cover tunes that he makes his own — I’ve gone on the record several times saying that I prefer his cover of Led Zep’s “Whole Lotta Love” to the real thing. (Heresy, I know, for Zep fans — and that's probably why I say it.)

Tony has stayed up for the duration of the telethon in the years he’s hosted the NYC arm and has supplied local viewers with a boatload of peformers from his favorite period in pop history (one that he took part in as a songwriter and demo singer), the Brill Building era. Tony spotlights the stars of that period and is generous to them as a host, whether they are in top condition (Ben E. King, Mary Weiss, Gary “U.S.” Bonds) or sadly have seen better years (a pop princess of the early Sixties looked to be in very bad shape last year, but Tony was still quite wonderful to her).

Sure, Tony goes for the schmaltz very often, but you can sense a sincerity behind what he’s doing, a sense that he’s not putting on an ironic “act” for us. The guy is genuinely excited about helping those afflicted with muscular dystrophy (I guess the phrase “Jerry’s Kids,” always a problem for adult sufferers, will leave the MDA lexicon with Jerry’s exit from the program…. ), and he makes a helluva dynamic and unpredictable host. There is probably no chance he’ll get to fill Jerry’s shoes on the national end of the show, but I do hope we at least can continue to see him host the NY/NJ arm (if there will indeed even be local hosts). With Jerry gone, we will need all the old-school show-biz we can get….
Posted by Media Funhouse at 2:44 PM