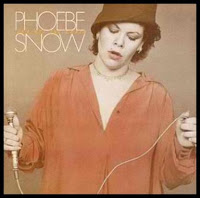 I have nothing to add on the subject of the most grisly celebrity death in the past few weeks — that of poor Yvette Vickers, who was found mummified in her house. I do want to offer tributes here, though, to two generation-defining female singers who left us too soon. The first is Phoebe Snow, the soulful singer-songwriter turned incredible nightclub belter whose death was sad, but whose life for three decades was devoted to what they used to call a “higher purpose.” The fact that she selflessly devoted her life to her disabled daughter and then died after a year-long coma that followed a stroke at the age of 59 definitely for me files her life neatly into the “…and you’re telling me there’s a god?” category.

Her first LP spawned her one and only hit single, the super-mellow and wonderful “Poetry Man” (yes, there were nice things on AM radio back then — see below). Only a year after that album came out, her life changed for good when she gave birth to a daughter with brain damage. The story of that relationship is recounted touchingly in this CBS Sunday Morning news story. Suffice it to say that she definitely qualifies for the Singer Mom Hall of Fame, along with Kirsty MacColl:

What is conveyed in that interview is that her daughter’s disability wasn’t a “tragedy” for her, although most of those watching from outside the relationship probably viewed it as such. Although she withdrew from the music business to tend to her daughter, she did keep working as a singer and definitely became a “musician’s musician.” This is very apparent in the duets she did with other women singers, as with Linda Ronstadt on that scary-awful show on Saturday night, back when it wasn’t so painful to behold. Here they belt the hell out of “The Shoop Shoop Song”:

And here is a priceless trio: Janis Ian, Phoebe Snow, and Odetta, singing together on a song called “Hymn” for a 1976 Ian album called Aftertones. The YouTube poster who put this one up shared something very special:

The best way to close out is to hear her biggest hit again — god knows, the oldies stations with the telescoped playlists don’t really go this “wide” anymore. Here’s “Poetry Man,” as done for the late-night rock concert show produced and hosted by that guy who died recently (initials DK), whose clips were all pulled from YT right after he went — thanks, you friendly folks at Solt Productions!

More interesting to me is the fact that the other Phoebe Snow song I knew well, but couldn’t’ve told you the title of for a million dollars, was a tune called “Harpo’s Blues,” which I found out this evening was actually the flipside of “Poetry Man.” This is some jazzy warbling for a mainstream pop record, and a fine way to remember Snow’s very special talent:

Posted by Media Funhouse at 3:52 PM