So now that “we got him!” and President Obama has assured us all that he’s basically ready to pull out all the stops to get reelected, maybe it would be good to take a little pause and think about exactly where the country’s (and certainly the media’s) mind is at.

The now-forgotten fact that, on the morning of 9/11, the then-President’s father, himself an ex-President, was having a corporate meeting with Osama’s brother Shafig at Washington’s Ritz-Carlton Hotel, was set aside long ago, although it’s an astounding coincidence, and indicated that the bin Laden family held a singular importance for our government. Also, the fact that two dozen members of the bin Laden clan had government clearance to leave the country without being interrogated in the week following 9/11 was also dismissed as being unimportant, the province of the tin-foil-hat crowd. Stop doting on things like that. U.S.A., Num-ber ONE, U.S.A. Num-ber ONE! 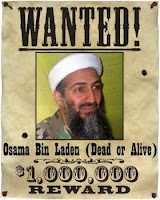 bin Laden served as “Public Enemy No. 1,” a heinous individual whose crimes were closer in time and memory for most Americans than those of Hitler. However, as the years went by, he became less “necessary” a villain for the scenario that is public policy and was far more valuable publicity-wise to the U.S. dead than alive. Thus he was caught and shot to death, “executed” as Moore puts it. When that happened, who knows, but there’s this wacky Navy SEALs story that’s been put out, followed up by the burial-at-sea that no one could be privy to. Hmmmm…

Was his wife a human shield or just a bystander? Did Osama have weapons on him or didn’t he? Was he taken unawares, or was he locked and loaded and ready for battle? Well, those details are already in the Kennedy assassination abyss of unanswered questions. “Take our word for it,” the government says — if you question the official story (details of which have changed steadily in the past few days), you are an extremist nut, “conspiracy theorist” who should just place their trust in the administration. Come to think of it, “Take our word for it” does sound an awful lot like Bill Hicks’ “Go back to bed, America!”

Instead, a whole mess’a Americans gathered in front of the White House and in Times Square to cheer Osama’s killing and scream, you guessed it, “U.S.A., Num-ber ONE!” That is the phrase that is always on the lips of those-who’d-prefer-not-to-think in this country, and it seemed just a tad bloodthirsty and ugly last Sunday night when the festive gatherings occurred. Crowds chanting “U.S.A., Num-ber ONE!” have made me cringe since the Reagan era, and not just because they have the moral certainty of a lynch mob. (Can ya imagine if anyone disagreed with them during their revels, or even asked them to just go the fuck home and sober up?) Here is a very good article on this phenomenon. In this case, according to the news media, a tone of “relief” was alongside the jubilation. The same thing had been said about the royal family wedding in England a few days before — “the American public needs a diversion to take its mind off of all the bad stuff that’s been happening lately.”

Good thing that we have the two events in a row to take America’s mind off the fact that more than a tenth of the eligible population has no job at the moment (whatever the official statistic is, it does not include the immense number who have fallen off the Unemployment Insurance rolls). In the meantime, our President has already been flexing his muscles (in my eyes, there’s nothing sadder than a Democrat trying to play macho — the Repubs have that area of sad small-penis-ish-ness all tied up, with a bow on top) by continuing our bloody adventures in the Mid-East.

I don’t care what a leader says about “supporting” our troops — if you don’t bring them home when there is no active war going on, you’re okay with their demise for absolutely no valid reason at all. In my lifetime, President Carter seemed like the only American leader who was actually troubled by people dying under his watch — and they did, certainly (we never stop occupying other countries), but Carter’s behavior then and now (especially now) indicates he has actually held true to his stated Christian principles. President Obama feels otherwise.

And then there was that whole healthcare debacle — in the mind of every intelligent American, one of the key tragedies of this country is that we don’t have nationalized medical care, that we are alone among First World countries in that regard, simply because the corporations that control our politicians would prefer it not to happen. As I’ve noted before on this blog, I admire President Obama’s intelligence, and I would like to believe that he is a moral, ethical being, but besides the whole soldiers-dying-for-oil aspect, there is also the interview he gave to Diane Sawyer where he stated outright that he would rather be a really good one-term president than a mediocre two-term president:

That notion was already flying out the window when he gave that interview. In the quixotic quest for what Keith Olbermann had termed the “unicorn known as bipartisanship,” President Obama kept pursuing Republicans to approve his plan, rather than slamming the fucker through (sometimes you just gotta be honest), as Bush did with all of his legislation, most importantly the First Amendment-dissolving Patriot Act. Of course, Bush had the added bonus that the Repubs vote in lockstep, whereas the Dems are always playing games with their allegiance.

Obama has shown that he can play tough — in fact, that’s all he’s seemingly been concerned with in the last few weeks, “trump”-ing (ouch) the birthers and al-Qaeda in a single week. So it’s a shame he played Washington politics-as-usual when it came to one of the two most important issues to every non-rich American (the other being JOBS). If he had gotten Americans socialized medicine (that word, that word!) and they had gotten used to it, even for a month or two, they would never give it up — think about how Americans refuse to give up luxuries they can’t afford, like broadband, cable TV, traveling everywhere in a gas-guzzlin’ SUV, etc. Once we as a country are addicted to something, there is never any going back. Instead Obama courted the Repubs, settled for a compromised bill, all in hopes of… a second term?

… Which brings us to our President as the Slayer (by proxy) of the Great Beast. It will no doubt serve as a calling card issue for the reelection campaign and will underscore his efforts to show he’s a “tough” military president who would withdraw troops from Iraq — only to send them flying to the “unwinnable” Afghanistan in another fool’s errand that continues to cost lives for no fucking reason. Except oil and imperialism in the mid-East, which has been our mission since the last Great Beast, the Soviet Union, collapsed. In fact, the importance of oil to the U.S. has been seminal to our foreign policy in the Mid-East since the beginning. There are several souls who have weighed in on this issue, but I’ll refer you to one who did it with charm, intelligence, and much-welcome humor, comedian and writer Robert Newman:

Last thought about the Osama-kill mission, whenever it really took place and whatever it consisted of (no, I can’t believe the government, even if it’s run by an extremely smart and charismatic “no-drama” type). I’ve talked about social commentator (or “decoder,” as he’d prefer) Lionel before on this blog and his current audio podcasts (which can be fond at lionelmedia.com and do have a charge, but it’s low) and his WPIX commentaries (amazingly challenging topics for a local news show, available for free right here). Lionel had a very smart and amusing take on the official photograph that the White House released of the Obama cabinet watching the killing of Osama — or were they watching something else, as Secretary of State Clinton now claims? In any case, listen to his “decoding” of the image: 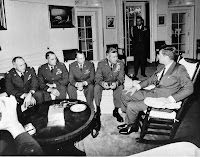 Perhaps the only thing Lionel missed out on — and he has lately been spot-on about Obama’s image manufacturing and the strengths and weaknesses that could be found therein — is that the photo is intended to evoke (poorly) the much-vaunted “Thirteen Days” photos from the Cuban missile crisis. Obama in fact does appear to have taken Kennedy to be a role model, mimicking both “missile-crisis decisive Jack” as well as “Castro-killer/Bay of Pigs Jack” (yes, they do sound like political action figures). His Kennedy complex worked this time, and the al-Qeada leader is indeed dead (I’m not doubting he’s dead and, no, I don’t need to see the pictures). But the solemnity of the Ground Zero visit that followed was seemingly welcome, yet wholly transparent as a reelection maneuver. The flow of activity last week, from the quelling of the birthers, to the cute joke-telling at the Correspondents dinner, to the public release of info about Osama’s death (forget for a second, of course, the story was changed in several dozen aspects a bunch of times), to the Ground Zero visit were all showy moves for reelection.

I’m not surprised by the above — I didn’t harbor any delusions that Obama would decisively solve all our current problems (trying is another matter indeed…). But it would be a real relief if he ceased the grandstanding and, having botched the healthcare issue (in his first two years, the only time it was certain he could’ve EVER gotten it passed — thanks for the politics-as-usual!) and devote himself to working on the economy and providing jobs. Perhaps if we ever left the “permanent war economy” and developed public works, we could not only employ the 10% of the population who is desperate to make ends meet, but we could also make sure that no more American soldiers die for absolutely nothing in the Middle East. Again, the president does proclaim himself to be a Christian — I’m not, but all that needless blood on one’s hands must have a psychic weight. Perhaps he will make a very moral and noble ex-president, in the manner of Jimmy Carter. Something to wash away the feeling of having played politics-as-usual….

FOOTNOTE: As always, Noam Chomsky offers a concise and pointed view of events. His take on the bin Laden killing? It was an assassination that came from America’s belief (re: the fact that Bush and cohorts killed hundreds of thousands for nothing but were never prosecuted) that “that was them, this is us”! Read his piece here.

And because I know that if you can’t end with a song, you better end with a laugh (or at least something jaw-droppingly weird), I want to once again link to a comedy routine that aired on All Night With Joey Reynolds a few months ago. It is now going into the “dated political humor” file (as well as the how-the-hell-did-that-get-on-the-air? file), so I give you, right after its shelf life has expired, the singularly strange “Mrs. Osama bin Laden” comedy interview by Joey Reynolds of comedian Shecky Beagleman (it’s a she) as the aforementioned wife of the terrorist leader:

Posted by Media Funhouse at 6:58 PM