The passing of Poly Styrene, best known from the band X-Ray Spex, causes a special pang in the hearts of people of a “certain age,” since she, like Joey and Johnny Ramone, died of cancer and will seem forever linked to the world of youthful rebellion, even though she was seemingly a very well-settled middle-aged woman at the time of her death. She was the first “punk crush” for many a guy in the U.K. and U.S., since she was perhaps the first “real” punk female presence — we’re not counting that cat-girl model here — and was young enough that she seemed more relatable than Debbie Harry (way too glamorous, and not punk herself at all) and Patti Smith (overwhelming in behavior and talent). She stood with Siouxsie Sioux (also overwhelming) as the premier punk woman. 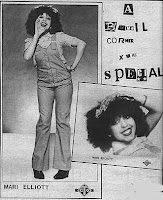 She was of Scots/Irish-Somali descent and had a life-changing experience on her 18th birthday when she saw the Sex Pistols (she described herself as being a “barefoot hippie” before that). She took out an ad in Melody Maker looking for “young punx who want to stick it together,” and shortly thereafter founded X-Ray Spex with friend Lora Logic, who played saxophone. Logic was reportedly thrown out of the band before their first album Germ Free Adolescents, but her sax arrangements were used (and she was part of a Nineties reunion of the band).

The importance of the very small body of work produced by X-Ray Spex (one LP, some singles) can’t be overstated, since Styrene’s lyrics and melodically shrieking voice was totally “new” for the time, and the honking saxphone sound perfectly underscored the urgent-sounding tunes. Although there were four other members of the band (all guys after Logic’s departure) the band seemed to be all about Poly, thanks to her great, commanding stage presence, and her unerring sense of odd fashion (the braces on her teeth were not a statement, she noted at the time — she just wore braces).

Again, the joy of punk music always came when the bands were not *just* punk — the best acts in that loosely defined “movement” went well beyond the jagged fashion bullshit and the DIY who-needs-guitar-lessons ethic, and wound saying something as well as defying the clichés that sprouted up very quickly, thanks to McLaren and company. X-Ray Spex didn’t make quite the eternal impression that the Clash or X did, but their music has remained fresh because of how raw and how “right” they sounded. Here’s a perfect example, with the fashion and the music right upfront: 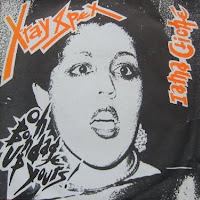 Poly’s best-remembered anthem, and it truly is an anthem, is the terrific “Oh Bondage, Up Yours!” which never dates (although its sound and notion have been copied endlessly) since it’s both a raw cry and an oddly cool feminist statement, right from its perfect spoken-word intro (there were a WHOLE buncha bands ripping that off at the time). More on that tune below (Poly herself knew she’d be forever identified with it, but did wish later on that she could’ve been known for something “more spiritual”).

After the extremely solid LP Germ Free Adolescents was released, Poly began to have problems, which were diagnosed as schizophrenia at the time but were later seen to be bipolar disorder. There’s an oddly touching documentary about the young Poly on YouTube that documents the era when she was just beginning to experience fame with the Spex but was feeling extremely uncomfortable with it.

The picture that comes from the documentary is of a highly creative young woman who’s being looked at as a new sort of role model. She is clearly not happy with any of that, and is facing a crossroads. She virtually “retired” from performing after the initial diagnosis, and thus this documentary offers a fascinating look at the point at which she’s starting to explore what she’s capable of as an artist and performer, but her life is starting to come apart:

She did come back to performing and recording in the Eighties (her first solo LP was released in 1980) and in 1981, she became a follower of the Hare Krishna faith. Her later solo music is much mellower and at points (as with a 1986 EP and her last single, “Virtual Boyfriend”) was dance music with smarter lyrics. She accepted the mantle of “punk pioneer” in later years and seems incredibly mellow in all her latter-day interviews.

In February of this year she revealed in the press that she had breast cancer. She died two months later, on April 25, with her website declaring that she had “won her battle on Monday to go to higher places.” She had a new album coming out and was perfectly at ease with her life — as with the story of Phoebe Snow (below), one begins to feel that she was “robbed” of time on the planet and suffered a lot while she was on it, but then again that’s just our view, from outside. As Marianne Elliott-Said and definitely as “Maharani Dasi” (her name after the conversion to Krishna), Poly seemed quite peaceful. The “punk” label came out of her being uncomfortable as a teen with the stuff around her, but in her later years, she seemed quite okay with the stuff inside.

Here is a terrific interview with the 21-year-old Poly, who seems pretty level-headed and sweet as hell. She speaks about not wearing the standard punk fashion of the time:

There is nothing like the Internet in terms of fandom for musical figures. Here is an early single by Mari Elliott, pre-X-Ray Spex:

And here is a bizarre trio: Poly, Carol Channing, and Jackie Collins. Talk about the trappings of fame: posing with these two highly cartoonish ladies can't have seemed normal for young Poly....

The theme tune to the Spex's only album, from Top of the Pops:

The live clips truly convey what the band was like. Here they do “Warrior in Woolworth’s” on The Old Gray Whistle Test:

And a last great live clip that Poly’s official account on YT made available. The band does “I Live Off You”:

Poly recorded two Xmas songs. The most recent was for her new album Generation Indigo, written with her daughter Celeste Bell-Dos Santos. It’s got a pretty wonderfully grim lyric, inspired by a guy in L.A. who killed people dressed as Santa. Ah, the joy of the holiday conveyed in a tuneful reggae nightmare, fun stuff:

And because we’re far enough away from the holiday at the moment to really enjoy it, let me link to a more traditional Xmas tune, “City of Christmas Ghosts” that Poly recorded with a band called Goldblade in 2008. It definitely takes a leaf from the Pogues’ “Fairytale of New York” but has a nice Ramones-ian guitar riff and the singer sounds like he’s channeling Strummer. One of the stirring lines in the chorus reminds us to “raise a toast to the friends we lost last year”….:

A bit of Poly in her Maharani guise, during which time she released a dance tune called "Sacred Temple." Here she is interviewed about her new faith, talking about creating “something that I can bring to my next birth”:

Before I close out, a listen to Poly’s mellow side, a very pretty tune called “Shades” from her 1980 solo album Translucence. The album shows the range of her talent, and is a world away from the work she had done with the Spex just three years earlier:

And because there is no fucking way I’d miss the opportunity to spotlight it, HERE is her anthem. She might not have wanted it to be her sole credit of note, but goddamn, it is a a great tune. Angry teenage girls don’t compose anything this awesome any more….

Here she is performing it two years ago as a middle-aged lady. And the original:

Posted by Media Funhouse at 4:01 PM