Where Taste Is Not an Issue: the wonders of Toronto's "Honest Ed's" discount store 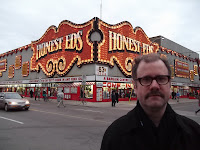 Jean Shepherd often speculated about what future civilizations would make of America — he maintained that our “slob art” (cat clocks, trash souvenirs, risqué trinkets) would outlive us and might well provide the only trace of our existence. Discount stores fascinate me for this very reason — while some of the stock moves quickly and is replenished, there are always shelves and shelves (and in many cases, even entire departments) of merchandise that you know will never sell.

The closer a discount store is to a museum, the more I love it. And thus I love Toronto’s “Honest Ed’s,” an emporium of cut-rate items, a department store of demented dreams, a church devoted to the theatrical profession and, yes, a mecca for both those who want a “good deal” and those invigorated by the palpable presence of the past in a “brick and mortar” setting. 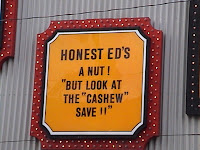 Honest Ed’s is a sensory overload from its façade inwards. Giant, casino-like signs advertise the place, but what makes its exterior so singular (okay, downright crazy) are a number of signs sporting unattributed “reviews” of the store that are actually just bad jokes (corkers out of an antiquated joke book). Such as “Honest Ed’s no midwife — but the bargains he delivers are real babies!” 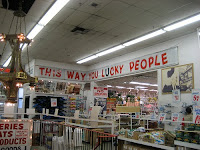 There is even a fake entrance (a non-functioning bank-safe door facing the street) that you are not allowed to enter unless you have “access.” In case you didn’t notice the intended playland-amusement aspect of the place from the exterior, when you enter you pass through revolving gates and are confronted with a funhouse mirror (a guy named Ed who created his own funhouse, how silly).

Various signs, all in the same handwriting (presumably created through a printing process — unless there is some old man with a magic marker chained in the store’s basement), welcome you, inform you that you shouldn’t steal, and also let you know about the store’s departments, which curiously include a dentist’s office and a beauty parlor. Honest Ed’s takes up a full block on Bloor Street and is virtually a self-contained city, lacking only a post office. (One YouTube store-tour video shows an immigration counselor on premises whom I must’ve missed on my visit.)

Once you’ve entered the place, two things strike you immediately: low-cost merchandise is spread out as far as the eye can see; and 8x10 stills, theater posters, and cardboard standees are mounted on every pillar and inch of wall space available. Think about how many pillars used to be in your local “5 and 10,” then consider anywhere from 20 to 40 photos adorning each one, and you have a small idea of how many headshots of theatrical notables are hanging in Honest Ed’s.

The first star you see is Robert Goulet, dining with “Honest Ed” Mirvish and his wife in the late Fifties (years before Camelot) and the last few autographed pics you see at the checkouts are, in giant poster-sized reproductions, Frank, Dino, and… Jack Carter? (Oddly I never spotted a single Sammy autograph — and you know he played Canada!). Also, pics of Mirvish meeting “the Queen Mum” and Prince Phillip (no shot with Queen Liz, sadly). 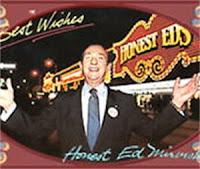 The rampant show-biz ephemera is the single element that differentiates Honest Ed’s from any other discount store or emporium du schlock. For Ed Mirvish was indeed a major entrepreneur in Canadian theater, who used the money he made from Honest Ed’s and his restaurants to buy and build Toronto theaters and to arrange for a steady flow of pre-B’way and West End shows to come into town (they were either “prior to a London run” or “straight from Broadway” — he caught the hits coming and going).

Now I have absolutely no interest in present-day Broadway theater (to quote Sondheim, “[Broadway] is never going to be what it was. You can't bring it back. It's gone. It's a tourist attraction”). Revivals, songbook shows, and extravaganzas don’t interest me in the slightest (and yet, as readers of this blog know, I love musicals — and yes, I’m straight).

Mirvish Productions, Ed’s company, has continued to flourish, bringing the latest hit musicals to Toronto for theatergoers and tourists who eat such things up with a spoon. Honest Ed’s offers a chronicle of North American (and British) theater during a more interesting time, though — the period from the Sixties to the Nineties that Ed booked shows into the Royal Alexandra Theater (his first acquisition, in 1962) and the Princess of Wales (built by him in 1993). 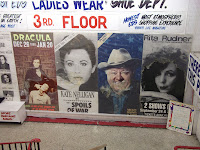 Thus, the store is simply plastered with autographed pics of actors, comedians, and singers who appeared at Ed’s theaters. Accompanying these are hundreds of even older headshots of luminaries like Helen Hayes, Katharine Cornell, and even John Barrymore. These are either from Ed’s own collection or they were stored in the theaters he acquired, since they definitely date back to the Thirties. 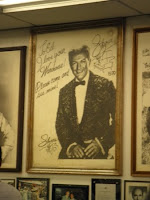 So the legends — Piaf (misspelled “Piaff” on the wall), Katharine Hepburn, Ingrid Bergman — are mixed in with the latter-day stars (Liza, Ann-Margret, Tony Bennett, Peter O’Toole) and the fellows who I’m sure Ed Mirvish envied, given his penchant for comedy (Henny Youngman, the aforementioned [poster-sized!] Jack Carter, Jackie Mason, etc).

Probably a couple of thousand show-biz 8 x 10s — and various Mirvish family photos and pics related to the store itself as well — are therefore layered on top of discount merchandise. But what exactly is on sale at Honest Ed’s? Basically everything from clothing to household appliances, food, and, yes, a blissful amount of “slob art.” Canadian moose key chains sit a few aisles over from glow-in-the-dark rosary beads and the astounding WALL of Elvis busts, nearly every one spray-painted in an inappropriate fashion — although the “space Elvis,” Ziggy Stardust-ish chrome/silver version somehow seems oddly right on.

Perhaps the most dazzlingly out-of-place area in the store is a section of the second floor where a number of giant sideboard-sized music boxes, organs, and large statues that adorned Ed’s theaters and restaurants are gathering dust and amazement in equal portions (although locals in search of a bargain walk right on by). Some pics of this section can be found here and here. Check out the steep price affixed to one of the items here. A short video tour of that area from the same intrepid YT poster:

This area of the store is strictly a museum and little more, since the statues and instruments are priced at tens of thousands of dollars. Perhaps some of the items are even worth that lofty amount — but if they are, what in hell are they doing alongside of the discount coats and underpants? Such questions cannot be asked at Honest Ed’s….

I was in the store for something like 90 minutes and experienced a range of emotions from amusement to sadness for a long-gone era, to something like a headache, giving way to a giddy, slightly high feeling — helped in no small part by a scary moosehead clock (right) and some mega-trippy 3D wall hangings that depicted, among other things, a Manhattan skyline composed of pink and baby blue skyscrapers. (One of my two purchases was wholly needed Funhouse reading matter, the Stations of the Cross Coloring Book.)

What struck me on the most basic level was how fascinating it was to see the “original business” upon which a small empire had been built. (The pic to the right shows the store after it opened in 1948.) Most families that carve out a lucrative and prestigious niche would’ve closed down or sold off the gaudy, tacky, and, yes, very useful store that provided the dough for their expansion into classier realms.

Not the Mirvishes. Ed, who claimed his first "encounter with show biz" was when Al Jolson's rabbi dad presided over his bris(!), obviously considered the store his starting point and one of his proudest achievements, even when he was doing far greater things — like being the owner of the Old Vic Theater in London for sixteen years! (1982-1998) Honest Ed’s was clearly his passion and, frustrated comedian that he seems to have been, his blank slate/performance space. 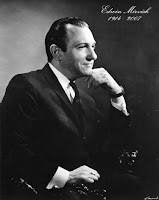 The store does contain a large empty area that can be rented out for business meetings or weddings. This only enhances the strange singularity of the place, which qualifies without question as one man’s museum to himself and his interests. Ed even joked about the place becoming his tomb:

*****
Because video is always the most powerful way to drive home a point, and the scenes from The Long Kiss Goodnight and Scott Pilgrim vs. the World shot inside Honest Ed's are not online, here is a tour of the store, scored by some very wacky music:

A photo montage of Ed Mirvish’s life can be found here, but the only way to end this piece is to offer Ed’s TV ads for the store. Probably the best of the bunch, from 1987:

And some talking sneakers (why not?):

Great thanks to the lovely Ms. Kayleigh for taking the top photo (I should’ve been smiling— but then again, we hadn’t gone inside yet!), and for introducing me to the splendid strangeness that is Honest Ed’s.
Posted by Media Funhouse at 11:28 PM

Wow, this place sounds like it's the REAL Temple of Schlock!

It's amazing. A 90-minute tour: I applaud your fortitude! Personally, I would require several short and methodical visits to explore the store without going into sensory overload and shutting down.

the idea of the emporium seems to transcend the standard business model of merchandising, doesn't it? in fiction and film, they are often the places of wonderment for children where an obscure toy or device of arcane origin will launch one on a journey of self-discovery. sure, antique shops have a greater cachet, especially when it comes to grand schemes, but these old shops, having accumulated generations of goods, really are, as you say, the story in themselves. the "stuff up front" pays the rent; the stuff "in back" is what makes people stay. i am of the opinion that the concept of the mall was based in this as well. what outlets today call "loss leaders" will bring in the customers, certainly. however, the science of keeping them in the "shopping trance" for any period requires awakening something grander, of seeing beyond the items available for purchase and creating an experience which ties to some distant past of nostalgic memory, or opens up onto an interest, perhaps once a central tenet to one's being, that, long-forgotten, becomes revived. and even such things as the curious curio--say a fragment of some foreign job lot of ceremonial japanese new year trinkets--will attract the eye and become a focal point of imagination for the next generation, who, having stared at it on the mantlepiece for years, will dust it off and say: Hey mom, what the heck is this thing?--thereby engendring a whole new raft of associations and memories far beyond its original purpose.
or, as i would steal the title from the great tom robbins novel: another roadside attraction.

another fan of Honest Ed's!! we just released a music video that pays tribute to the store- the style of the signpainting was especially featured in the imagery...we fell in love with it during the shoot. spending three full days in the store was certainly sensory overload!