Russ Meyer’s accomplishment in Beyond the Valley of the Dolls (1970) becomes more daunting with every year: he mocked an era as it going on, a common practice in the movies these days but extremely radical at the time he was doing it. And why does this come up now? Well, because there’s never a bad time to discuss BVD (as it is known by fans), but also because one of the “Carrie Nations,” Cynthia Myers, died last week at the age of 61.

Myers was best known for being a Playboy playmate, a distinction she earned in December of 1968. According to her obits, she was 17 when the pictures were taken, but the magazine didn’t print them until she was 18 (that is a fascinating line in the sand right there). She made her movie debut in an uncredited part in They Shoot Horses, Don’t They?, but got her first and most prominent role when Russ cast her as “Casey Anderson," the lesbian bass player for the Carrie Nations rock band. 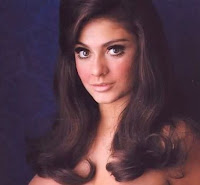 She only appeared in one more prominent role, in a Western called Molly and Lawless John (1972) with Vera Miles and Sam Elliott. One fan of Cynthia's likes her in that film so much that he's made two little music videos, found here and here. After that picture, Myers continued as a model, but basically her movie days were over.

So we say farewell to Cynthia in the only way that seems appropriate, by spotlighting the musical sequences from BVD that are online. First a geekish note about the music in the film: the songs were initially sung by studio singers Lynn Carey (daughter of Macdonald Carey) and Barbara Robinson.

Carey was a particularly solid belter who can be heard on YT via the controversial album Mama Lion (which featured a pic of her bare-chested, nursing a lion cub). Here is a live clip of her on German TV doing a song that has the same title as a song in BVD, but sounds quite different. 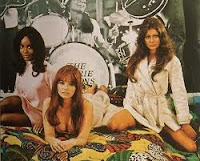 I know the half-dozen songs in the film very well from repeated viewings of the picture, but also from hearing the soundtrack album half a million times. The voice on that LP was actually that of Ami Rushes (there’s a much younger Christian contempo artist with the same name, but she appears too young to be the woman who sang on the BVD record). Rushes’ voice was also excellent, but Carey has the bigger cult rep, and it was long lamented that her voice was replaced on the album, until in recent years a CD came out that featured both versions of every track.

You can check out different versions of the songs if you want to compare the belting styles of the respective singers, but let us now focus on the girls who mimed their way through the picture, including Cynthia. Here is her memorably melodramatic first lesbian kiss, with the great Erica Gavin:

This last clip should be seen in its widescreen incarnation (available on DVD), but the VHS version (which is what this person uploaded to YT) shows off Cynthia and the girls very well. The clip also begins with another bit of melodrama from Ms. Myers (and yes, the vocal is from the “throaty” Lynn Carey):

It was noted in some of Ms. Myers’ obits that her picture was taken into outer space by the astronauts on the Apollo 12 mission. Add that to the fact that she was reportedly a fave pin-up of the soldiers serving in Vietnam, and you have a quintessential Sixties model.
Posted by Media Funhouse at 12:11 AM

Labels: "Beyond the Valley of the Dolls", Cynthia Myers, Deceased Artiste, Lynn Carey

I am writing about the Playmates of the 1960s. Cynthia has a bigger following than most, but still overlooked. I wonder why her acting career was so short lived.