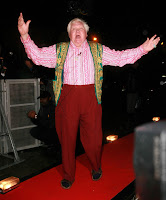 I want to craft a nicer, longer tribute to “Unkle Ken” (as he was known on his Facebook account) for the blog or the Funhouse TV show, but in the interim I’ll just reiterate what I said in the two episodes that aired in 2008 which were based on my interview with Mr. Russell. I have loved his work since it first seared itself onto my retina as a teen, but only recently was I reminded of just how incredibly talented he was, upon re-watching his BBC dramas about the lives of great artists.

He was a wonderfully indulgent and undeniably brilliant artist who was very generous with his time (I planned a half-hour interview with him that quickly extended into nearly an hour). He had sadly become “unbankable” in the last two decades, but that was no major problem to him — the ideas continued to pour forth, and he just had to shift his vibrant images into other media (opera, theater, shot-on-video/micro-budgeted features, cable productions, even self-published books!).

The biggest discovery I made coming back to his films as a middle-aged man was the emotion that bursts out of the best of them. Russell was dubbed an "enfant terrible" throughout his life and had a reputation for being wildly indulgent and slightly crazy. There was definitely some of that in his make-up (madness is always a part of genius), but he also was an artist who had a deep emotional involvement with his best films. His masterpiece The Devils was perceived as a loud, brash, blasphemous film, but it is actually a passionate cri de coeur against religious hypocrisy from a man who really did believe (Russell discussed with me how his beliefs swerved from Catholicism to a pantheistic form of nature-worship when he stayed for a time in the famous Lake District).

In an interview included with the recent box-set of his BBC work, he said that he came up with the images in his music films by sitting in a darkened room and simply listening to the music of the composer in question. This practice, which I have no doubt is true given the many lyrical moments in his films, runs counter to the “madman behind the camera” reputation he acquired, and I think it comes closest to giving us the best picture of the true Ken Russell.

It’s evident to me that the reason he was so nice to admirers and interviewers was because he was still a fanboy himself, paying tribute in his own way to those artists whose work had moved him and brought meaning to his life (he spoke of his favorite film, Savage Messiah, as fulfilling a promise he made to the memory of the sculptor Gaudier-Brzeska). He was larger than life, in every sense of that phrase, and I’m very proud to have spent some time in his presence. New, colorful filmmakers may emerge in the years to come, but “Unkle Ken” cannot be replaced.
*****

There are only two small fragments online from my far-ranging interview with Russell (with more to come in the future). First, him speaking about his off-Broadway (and American theater) debut, Mindgame:

And his approval of people putting his older, "MIA" films online (at the time we did the interview many of his films were on YT, including Savage Messiah and the uncut Devils):

Posted by Media Funhouse at 5:54 PM