Herzog gets emotional in “Into the Abyss”

Werner Herzog remains one of the true originals in world cinema, a filmmaker who began as a teller of bleak tales about madness and social alienation, and then became a busy documentarian crafting “ecstatic truth” (read: his slant on real events). He qualifies as one of the few arthouse filmmakers that the average plugged-in American viewer might have heard of, and in the last few years he has indeed traded quite often on the deadpan, eccentric persona he has fashioned in his documentaries.

His latest, Into the Abyss, is different from his recent work in that, while it depicts a colorful, dangerous environment, it is laden with raw emotion and finds Herzog stating his central message very early on, in an interview he conducts with one of the film’s central figures, Michael Perry, a young killer on death row in Texas.

The film has been likened to In Cold Blood, and the crime that serves as its pivot is even more trivial than the one in the Capote classic. In 2001, Perry and another young man broke into a house to steal a red Camaro and wound up killing the mother of an acquaintance in order to steal the car. They later encountered the acquaintance and his friend, and killed them in the woods, again to cover up their theft of the Camaro.

Though Herzog has ordinarily avoided assigning a specific message to his work — and of course there are several “messages” in this film — here he states at the outset in his first (and only interview) with the young man on death row, “I don’t think human beings should be executed.”

The film’s structure is thus contested by the fact that he introduces a message right at the outset, and then much later in the film cleverly elides the principal event in the narrative, namely the execution of the young man on death row. He accomplishes the latter by including a clip in the last third of the film in which the event is referred to in the past tense by one of his talking heads (one of the victims’ relatives who attended the execution), thus alerting the viewer to the jump in chronology.

These stylistic deviations from the norm ensure that Into the Abyss cannot be a thriller, and yet Herzog still toys with that form by using a foreboding musical score by Mark Degli Antoni (with David Byrne on guitar) and probing, handheld camerawork that seems to signal grisly discoveries (that, of course never come). Herzog uses the story of the murders to do several things, most successfully sketching a portrait of a community where life is cheap and crime is commonplace.

Most of the people he speaks to know people in prison, or have lost relatives or friends to violent crime — the most jarring instance has a murder victim’s daughter offering a laundry list of the sad and violent ways her family members have died in the preceding six years.

The film resembles the work of onetime Herzog student Errol Morris (Gates of Heaven, The Thin Blue Line), since it as much about America as it is about a specific crime. The Rashomon-like prism through which Herzog views the crime is intended to show that the matter of who committed the murders — both young men deny they pulled the trigger on any of the three victims — is secondary to the after-effects and the fact that several states in the U.S. feel that killing a murderer will somehow “compensate” the relatives of the victims and deter future criminals. (Herzog answers both arguments in the film.)

The striking thing about the film is that it is Herzog’s most touching picture in some time. He has never used Spielbergian devices to manipulate his audience — for the most part we have experienced wonder and fascination at the unusual locations and situations he has spotlighted in his documentaries, or studied the “mad” protagonists in his fictions, from a comfortable remove. 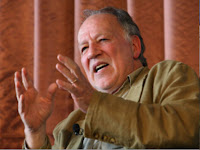 Into the Abyss removes those screens, and for the first time since select scenes in Grizzly Man (and mind you, he’s made six films since that arthouse hit), Herzog takes the time to study individuals feeling sorrow. I am the very last person who’d want to get into a discussion about the “race for the Oscars,” but the emotional component of this film is so strong that one wonders if it will net Herzog a Best Documentary award — if not, no harm done, because the Academy Awards rarely reflect true quality and are more often than not a popularity contest.

Not that Herzog hasn’t acquired that kind of popularity in the last few years. His eccentric onscreen persona has made him a crowd pleaser on both Conan and The Colbert Report. These “rollicking” appearances (where he plays along with the host’s image of him as a wild and crazy German filmmaker) put me in mind of the moment in Les Blank’s Werner Herzog Eats His Shoe, in which he acknowledges that a filmmaker has to play a “clown” to attract the public to his film:

Herzog’s documentaries have all been works of quality and depth, but perhaps Into the Abyss resonates so deeply not only because it tells such a serious tale, but because it is the work of a very serious filmmaker.

A few clips from the film are available online, but a key one, of Herzog discussing with Michael Perry the fact that only a healthy prisoner can be executed in the U.S., is available at Herzog’s site.

Here is the official trailer:

Posted by Media Funhouse at 5:45 PM

i had a friend who told once that the major revelation he had from dropping acid was "don't look into any mirrors".

the thing about them is how such a simple look at one's self becomes this journey without end. at first, it is just a reflection of our image. then it becomes the mental reflection on the physical. then the reflection on THAT, and then ON THAT of THAT, and on and on, ad infinitum, ad nauseum, etc. until the worm ourorborous swallows its own tail.

what makes this great is how werner just lets the question hang out there in the air. a question is often an empirical assertion answered by collecting evidence, and he does that masterfully.

and what makes it better is how he invites you, so subtly, to experience the full range of emotions. i was quite happy to have knowledge that the perps of this heinous crime were punished. that one got the ultimate, i was not troubled by at all, when i saw the impact on the relations of his victims. then i was gobsmacked by the sudden realization that nobody died and left me the robes, wig and gavel. and i was saddened, but, as well, exhilarated by being so neatly shown it is just as human to want revenge and it is to show mercy.

werner doesn't judge, he just holds up the mirror.

This is a dark, dark work that made me uncomfortable. I did not wish to see the faces or hear the voices of the 2 accused and convicted men telling their contradictory stories. I looked away from the screen a few times.

Werner states his opinion of the death penalty up front. I am undecided, but this is a hard-hitting, important film.