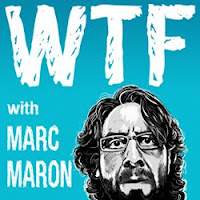 Comedians are either “on” or “off” during interviews. The perfect example was George Carlin — George would be in his revved-up, observational mode for his panel appearances with Carson, Leno, and Letterman; for quieter, non-late night shows, he generally was very quiet and introspective, never coming within a mile of a wisecrack.

Thus, depending on the outlet, comics will give one of two interviews. On the Marc Maron podcast WTF, however, a third option has come into being — that of the comic “on the couch,” delving into their insecurities, paranoias, and petty jealousies. It’s not clear exactly how this has developed, but Marc has surely become the podcasting “therapist” for his comedy colleagues.

Perhaps this is a result of the fact that Marc is not a professional interviewer. I first saw him as one of the million standups who inhabit the late, late hours on Comedy Central, but finally became familiar with him when he cohosted a morning show on Air America called “Morning Sedition.” When that show was axed, he floated around as a substitute host and was the cohost of the network’s only video podcast for a while. 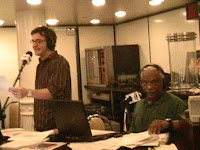 I’ve written about AAR in the past, but suffice it to say that whoever put the network together had the rather wonky idea to pair standup comics or comedy writers with experienced radio people. Marc was teamed with Mark Riley, who continues to do a great job on WWRL-AM these days (6-8 p.m. weekdays). The morning show was fun when I caught it, but Marc’s subsequent hosting gigs found him veering away from political concerns and talking about himself at length. Thus was born the frame device of WTF, wherein he delivers a blog-like recap of what he’s been up to. This is not where the magic comes in.

That occurs when he begins to make the guests on his podcast feel at home by discussing a past meeting they had (with him frequently apologizing for how rude he was to the guest when he met them) or how they’ve been feeling lately (a leading question if ever there was one for people who make a living analyzing themselves in their work). Within a few minutes, the guest oddly consents to sharing information about the darkest times in their career or their lives. Depression, neurosis, breakdowns, incarceration, abuse by a significant other, a child’s life at risk in a hospital — somehow, Marc’s podcast has had all of these situations and more shared by comedians.

Which is not to say WTF is planned to be a therapy session — a good number of the episodes just end up going in that direction (certain guests, like Ray Romano, Stewart Lee, and Thomas Lennon, have seemingly kept it from going there). Perhaps it comes about because Marc overshares with the guest and will openly note if he is jealous of their success. Perhaps it comes about because Marc doesn’t explore the machinations of creating comedy but he does immediately leap into the machinations of the comedy lifestyle (traveling on the road, being booked to open or “middle,” dealing with audiences).

The podcast is thus ideal for both comedians and comedy fans because of its “shop talk” aspect. Marc has had a number of individuals on whose work I’m not a fan of (case in point: Judd Apatow), but his discussions with them have generally been more entertaining to me than their work is, because of this unintended “therapeutic” level of discussion.

And the show’s guest roster has gotten more and more impressive and expansive (the only missing element: the older troopers who are still alive in NYC and L.A., and would surely consent to interviews). WTF attracted the most attention when Marc has had “name” guests on and discussed “joke theft” with them. Again, because Marc is not a conventionally honed interviewer and is a comedian himself, he generally has the guts to ask questions that most other interviewers would gloss over.

I was very surprised to hear him raise the issue of stolen material with Robin Williams, who offered a very polite and sedate response to the question. He pursued the issue further with Carlos Mencia (in the two episodes that have brought the most attention to WTF) and Dane Cook — again, a performer I won’t spend a second listening to as a comic or actor, but if he has agreed to visit “Dr. Maron’s couch,” I’m all ears. 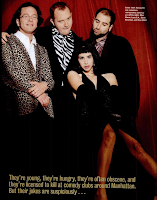 Marc is definitely an unconventional interviewer, and so his chats go into some very unconventional places, especially when he decides to document “healing” moments with old friends on tape for the podcast, rather than just let them happen “offstage” in real life. Thus, a few weeks ago, he tried to heal a rift that had grown between he and his old friend Louis C.K. (seen at right with Marc when both were much younger lads, along with Dave Attell and Sarah Silverman; the latter couple's relationship was gone into in much depth by Silverman recently on WTF). A related recommendation: Louis' FX show Louie, which debuted in 2010, was by far the darkest, best new American TV comedy to appear since Curb Your Enthusiasm, in my opinion.

The conversation, which spanned two episodes, was direct and honest, especially near the end when Marc once again confessed his envy of Louis’ recent professional accomplishments. Louis responded that when Marc was envious of him he was being a “really crappy friend” since he went through a divorce and a series cancellation while Marc was busy envying him. One can commend Maron for not editing this exchange out of the show, but a lot of what Marc does both on the podcast and in his standup has to do with being honest to a fault….

So what is the final point here? WTF is a completely unpredictable creation that can range from the truly mundane (Marc talking at length about how his new jeans and boots fit him) to the exceptional (the joke-theft discussions, a talk with Doug Stanhope and Janeane Garofalo where Marc introduced the phrase “children of Bill Hicks”). During the year-plus the show has been on, Maron has spotlighted comics I need to know better (including Brendon Burns), those whose work I forgot I liked a whole lot (Maria Bamford), and one energetic gent whose nonstop kvetches I do heartily enjoy (Eddie Pepitone). Catch WTF on iTunes and on its official site.

One of the few guests who actually has done shtick in Marc’s home studio, Nick Kroll as Latin DJ “El Chupacabra”:

And with Eddie Pepitone: