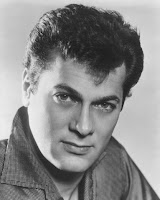 So what did Eddie Fisher and Tony Curtis have in common, besides dying within a week of each other? Well, first and foremost they became famous in the Fifties (Tony’s fame continued on into the Sixties, with diminished box-office returns). They both had famous acting daughters (Carrie Fisher and Jamie Lee Curtis). They both were children of Jewish immigrants and served in the Armed Forces (Tony in the Navy during WWII, and Eddie in the Army in the early Fifties). They both had memorable marriages to movie stars, with Tony having one (Janet Leigh), and Eddie having two (Debbie and Liz). What is the most significant link between these guys for me, however? Good freakin’ hair!

For me, Tony Curtis was a function of the 4:30 Movie here in NYC on Channel 7. A lot of Tony’s bigger (and lesser) features I first saw shoehorned into that ridiculous timeslot (about 70 minutes of movie, give or take — you wouldn’t believe how calm Deliverance was on the 4:30 Movie….).

I also have always been amazed at Tony’s resilient heterosexuality, as Janet Leigh was perhaps one of the prettiest starlets in Fifties Hollywood, and yet he cheated on her a lot (by his own admission) because he felt that acting with someone gave him license to sleep with them (again, his own statement on talk shows). He famously said his love scene with Marilyn in the completely perfect Wilder comedy Some Like It Hot was like “kissing Hitler,” but then somehow came up recently with the “confession” that he slept with her (he said they had an affair when she was a starlet in 1949 or so, but how come this never came up before?).

Also, the Bob Woodward book Wired reveals that Curtis was watching TV with John Belushi and found out that an actor “of his generation” had died an accidental death — I’m thinking it was William Holden — and he said something to the effect of “less competition!” The oddness of Curtis thinking that Holden was still competition at that late a date — and in fact Holden was still starring in items like Network and S.O.B when Tony was starring in The Bad News Bears Go To Japan.

But let us not remember the guy only when he was older and stranger. Well, let’s…

Let us celebrate his great movie work, but first a very strange video I discovered:

and of course the amazing Skip E. Lowe:

Two of the more enjoyable items that showed up regularly on the 4:30 Movie:


The whole movie can be found here.

And, without question, his finest performance, as Sidney Falco:


The whole movie can be found here.

Now, as for Eddie, I just had to pay tribute to him because he was my Mom’s own Justin Bieber. My mother was one of the two members in the Astoria, Queens, chapter of the Eddie Fisher fan club back in the early Fifties. I asked her this week what the club did — did they wait outside Eddie’s hotel room, attend his concerts, haunt toy stores for doll-like effigies of him? No, this was a far calmer time (Sinatra and Martin and Lewis to the contrary), so she and her friend just listened to Fisher’s records and got together and watched his TV show Coke Time, which ran a total of four seasons from 1953 to ’57.

According to different obits I read, Fisher had anywhere from 35 to 50 Top 40 singles during his heyday (1950-56). He is best known, however, for two of his five wives, Debbie Reynolds and Elizabeth Taylor (who formed with Fisher the original Brad/Jen/Angelina guy/wholesome [dull] girl/sexier girl trio). Eddie, of course, was then dropped by Liz in favor of Richard Burton, and he continued on as a singer and a guy “who lost Liz.”

Time to revisit his wholesome tunes for a bit. Here is his big hit “Anytime,” which was popularized decades before by Emmett Miller (biographized in the amazing Where Dead Voices Gather by Nick Tosches):

Eddie’s biggest hit, the (let’s be honest) corny but wholesome “Oh My Papa”:

An example of the selfsame Coke Time that my Mom enjoyed back in the early Fifties. This ep finds Eddie singing the always-mellow Perry Como’s “Mama Loves Mambo” and joining (gulp) Florence Henderson for “Fanny”:

Eddie in his Army uniform on What’s My Line?, which I still miss incredibly in the late evening hours (curse you, Game Show Network!):

And on The Dean Martin Show:

I close out with two of my favorite Eddie discoveries. A goofy Xmas tune from Spike Jones that really doesn’t sound like a Spike Jones recording. The title? “I Want Eddie Fisher for Christmas”:

Oh, yes, Eddie kept recording in the Sixties. Here he is, doing the Beatles’ “Fool on the Hill”:

Very interesting,all the way around. Debbie Fisher just had a massive heart attack at the age of 60 and believe it or not, I was getting her father confused with Curtis. I did not know they had so much in common. Thanks for your research and a very entertaining blog.