The media and people being rescued from holes: an extremely brief history 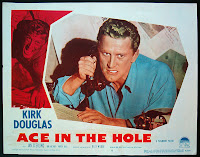 I watched a short bit of the minute-by-minute coverage of the Chilean miners being rescued this week, and began to wonder about the phenomenon of wall-to-wall cable news coverage of people who are stuck in holes in the ground. I mean, it is great the miners were rescued, but what was fascinating is that America “was holding its breath” for Chilean citizens, and we were watching every single move that was being made to save these gents — but none of the same coverage, or much of any TV news coverage at all, was given to Chile back in the Seventies when lots and lots of Chilean citizens were killed by Pinochet after the U.S. backed his military coup (a fate that's a bit worse than being stuck in the ground when your job is to be... stuck in the ground). Oh, I know, I know… that requires too much memory, too much perspective, and wouldn’t make a nice “reality show” moment on the air.

In the meantime, let us recall the first-ever person-falling-into-a-big-hole American news story: cave explorer W. Floyd Collins’ burial in a cave in central Kentucky back in 1925. Collins died after fourteen days, but the Louisville reporter covering his story, William Burke Miller, won the Pulitzer Prize for his stirring coverage of the story. 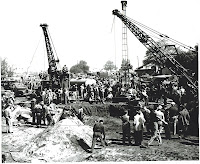 Then there was the first big-time TV person-in-hole rescue attempt (which was adapted by Woody Allen for his Radio Days): on April 8, 1949, little three-year-old Kathy Fiscus fell in a well in San Marino, California, and the rescue attempts — which were carried live on KTLA in what is described on Wikipedia as a “watershed” in TV news coverage — didn’t succeed. The little girl fell in on a Friday afternoon, was taken out of the hole by Sunday night, but was declared to have most likely died soon after she fell in. Now that kind of dramaturgy would be a massive downer for a cable-news story. 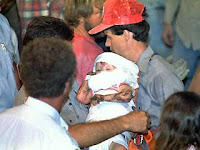 I wasn’t around for the Fiscus rescue, but I do remember the heavy-duty TV coverage of the “rescue of Baby Jessica” story in October 1987. In that case, an 18-month-old kid named Jessica McClure fell in a Midland, Texas, well, and she was retrieved alive two days later (now there’s your reality show happy ending!). I remember being amazed by how much time and emotion people were devoting to the story of one kid who was admittedly in a terrible situation — although folks around the world were also starving, being persecuted, and dying every day. I guess the Freudian notion that this one kid could indeed be saved (who wants to take the time to think about an entire populace that is pretty damned doomed?) was the kicker in terms of TV news.

As a film buff, though, what immediately sprang to mind during the endless coverage of the rescue of the Chilean miners was Billy Wilder’s cynical masterpiece Ace in the Hole (1951). The film follows Kirk Douglas as a New York reporter whose misbehavior has exiled him from NYC to New Mexico. He soon finds the ultimate story that he can build a path back to Manhattan on: a local man getting trapped when a cave collapses. The movie is a brilliant, prescient view of the “big carnival” (the film’s other, happier title) that surrounds the cave-in as the media comes to town to cover the rescue attempt. The film is jaded, nasty, and never really ages, in terms of its view of how absolutely phony “sympathetic” media coverage really is:

This doesn’t contain my single favorite line in the movie (From Jan Sterling: “I don’t go to church. Kneeling bags my nylons.”), but it does contain another winner at the opening. The movie was Wilder’s biggest flop, but it’s now recognized as one of his most perceptive — albeit thoroughly, wonderfully nasty.

Remember that the man who rescued "Baby Jessica"eventually succumbed to his depression and killed himself. He apparently became obsessed with many things tangentially connected to the story: everything from the casting of the actor who portrayed him in the TV movie to other media event/tragedies.

There is an "Ace in the Hole"-inspired Simpsons episode from early in the show's run, called "Radio Bart". Whether you are a fan of the show or not, they not only lifted the basic plot, but nailed a lot of the same targets.

Thanks for the insights, Greg. I always knew that casting was all-important, but when someone gets that hung up over the TV movie of an event they've been involved in, deep, deep therapy is probably called for....