There are thousands of podcasts on the Internet at this point, and only a scant few are really attracting any attention. In recent months, Richard Herring has produced literally dozens of podcast episodes for as many as four different shows, earning him the sobriquet “podfather” on British comedy websites. He may not be the guy who “broke” British comedy podcasts (that would have to be Ricky Gervais). But Herring is certainly one of the hardest working comics in the U.K. and, when he’s firing on all cylinders, he’s also one of the funniest.

He began as half of the comedy team of Lee and Herring with Stewart Lee (about whom, see the blog enry below). Herring essentially played an id on two feet in the duo, acting out his adolescent urges in strange and sometimes dark ways

[That sketch becomes more interesting when you find out that later on Herring worked with and reportedly dated Sawalha for a time.]

Both Lee and Herring are excellent sketch writers, and so some of my favorite Herring moments from the L&H TV series Fist of Fun (which can be found in its entirety on Stewart Lee’s site) found him playing either a sympathetic schlemiel or an utter bastard, as in his portrayal of a spiteful driving instructor. I noted in my entry on Chris Morris below how Morris and Brooker’s Nathan Barley has the daring abrasiveness of Mike Leigh’s early telefilms; Herring’s teacher definitely seems like he could be a cousin to the angry driving instructor in Leigh’s Happy-Go-Lucky (a tad less volatile, perhaps):

Another Herring fave of mine from that period, his view of married men as mindless zombies:

I won’t delve too deeply into Lee and Herring’s writing credits (for that info, again, see my entry on Stewart Lee), but I will note that when the team broke up it seemed like Herring might just remain in the background and be a comedy writer rather than a performer (he scripted much of a popular sitcom called Time Gentlemen Please). Once he decided to enter the world of standup as a solo act, he began to work on two fronts. First, creating all-purpose bits like this one about the “Riddle of the Sphinx”:

He also began to write themed one-man shows he brought each year to the Edinburgh Fringe Festival. These shows ranged from one in which Richard tried to recreate the twelve tasks of Hercules in the modern world, to a fact-filled, surprisingly touching male response to The Vagina Monologues (called, wait for it, Talking Cock) and the recent Hitler Moustache, in which he explored the reactions the toothbrush moustache brings about in people as he valiantly tried to reclaim it “in the name of comedy”:

The Chaplin-Hitler kiss concept in this clip is inspired:

Herring’s one-man shows, including Hitler Moustache, are available on DVD from Go Faster Stripe. Two that weren’t shot on video are available as audio downloads (in what I believe are work-in-progress versions) at fistoffun.net, Christ on a Bike and Talking Cock.

So, okay, so far we’ve got a guy who’s a proven commodity as a TV sketch writer and who puts on critically lauded shows at the Edinburgh Fringe. He also writes a blog entry for most every day of the year on his website. He put out a book earlier this year that explored his prolonged adult adolescence and turning forty, the funny and sentimental How Not to Grow Up. All that might be enough for the average standup, but Herring seems to be a particularly driven individual who, for me, produces some of his best material when he’s on the spot and starts tossing off ideas and going into surreal, sometimes dark, and very often vulgar tangents on his podcasts. This tendency to think well on his feet has been seen in the video of his that has had the most hits on YouTube (a million and counting for the shorter version, I’m linking to the longer one here), this moment when he had to cope with a drunk heckler:

Herring can be clean and “fit for broadcast” — he proves that in his DJ gigs like the long-term one he’s been doing with TV/music-critic Andrew Collins and a sit-in for a vacationing DJ on Absolute Radio.

These are both fun programs, whose best moments are boiled down into a short podcast. His most dedicated podcast has no origin on radio: “Collings and Herrin,” also done with Andrew Collins, is an uneven 'cast that ranges from meandering personal chat to insane brilliance — the latter usually happens when the two do live shows for the ’cast and Herring takes it upon himself to playfully torment his cohost or an audience member. 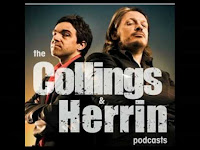 Herring has expressed his admiration for Cook and Moore’s inventively filthy “Derek and Clive” bits, and he often strays into the same territory, sometimes to purely silly effect and other times for really inspired moments. One particular example on the C&H show found Richard going off on the Muslim religion, not because of any personal prejudice, but because it is “just as shit as all the other religions.” (Herring is perhaps the most blasphemous of all atheist comics, and for that I salute him, ex-Catholic that I be.) When he goes on insightful and bizarre tears about things like 9/11 and “what would be really offensive” to be put in the WTC site (a propos of the “Ground Zero” mosque), he’s left behind standard comedy structures and has wandered into an area where his riffing turns into great surreal comedy. Here is that episode.

There is no offense meant by Herring’s rashest routines; in fact he seems to be a pretty “progressive” guy when speaking out of his “Herrin” persona. He needn't worry, though, because he has moved beyond the censorial confines of radio for his finest achievements in the burgeoning world of podcasting. Although he hasn’t really — he's also the host and creator of a currently-airing limited-run series "reclaiming modern-day cultural demons." (Yes, yes, that does make five podcasts in all.) Which brings me to his finest achievement in my view: his very linear, yet also very tangent-prone, sketch-comedy podcast As It Occurs To Me.

AIOTMA, “as it is called by all the cool kids,” is a scripted sketch show that rose out of the ashes of Herring’s this-day-in-history radio comedy program That Was Then, This is Now, which can be heard in its entirety here. After that show was cancelled by the BBC, Herring decided to start a live sketch-comedy podcast that would have no limits in terms of content, but which he would script only a night or two ahead of time (the guy does seem to enjoy the challenges that come with last-minute invention).

Writing comedy at the very last minute sounds like a recipe for disaster (or basically just a “Morning Zoo” radio show) but when AITOM is getting really weirdly funny, one begins to think that Herring and co. are in the ballpark of Spike Milligan. Not that AITOM is The Goon Show reborn exactly (nothing could ever be as maniacally inspired as that holy series), but when the Occurs team move quickly in and out of sketches, bizarre characters, and really nasty catchphrases (my personal favorite being the unpleasant but oddly fitting “sexcrement” as a synonym for children), it becomes evident that Herring is using the podcast in the way that the mighty Spike used the radio comedy show format — in effect, killing it in order to produce something new and far more ridiculous.

Herring is self-professed fan of Bill Hicks, and he does operate on AITOM with a great sense of how to deconstruct a comic situation, re-construct it, and then utterly decimate it once more for comic effect, which is an element that I’ve noticed had crept into the most brilliant British standup after Hicks became a cult figure over in the U.K. (he having done the self-examination bit many times in his later, better routines).

The final, essential component of AITOM is the small ensemble cast. Herring has worked with a few small, tight casts (check out the radio series Lionel Nimrod’s Inexplicable World), so he knows how to gather a cast of versatile performers. Here, he has musician Christian Reilly on hand to acoustically provide musical “stings” and topical songs to act as transitions from sketch to sketch; Reilly’s theme for the show is catchy-as-fuck, and his wonderfully prissy impression of Bryan Ferry is also very funny. Emma Kennedy provides all the female voices, from sultry seductresses to batty mother figures; her talent is manifest on the show, but I was most amused by her take on Michael Jackson as a baby-man ready to dance. Rounding out the quartet (because Herring always stays Herring on the show) is Dan Tetsell, who is as versatile as Kennedy and provides voices that are just as memorably deranged — the clear fan favorite being his nasal take on Herring’s radio/podcast partner Andrew Collins, called here “Tiny Andrew Collings.”

Herring’s torment of his C&H partner has gone into some very oddly Freudian and very funny places here, including Herring sleeping with “Tiny Andrew’s” mom, killing him off not once but several times, and doing a really nice riff on the end of The Prisoner where “Collings” and Herring are indeed one (or each other’s parents, or brothers — I can’t say I remember how Richard resolved the problem, but it was very funny and truly McGoohan-like).

You can check out As It Occurs to Me on iTunes or (the better option, I think) on the British Comedy Guide. It might be best to start from the beginning, or you may never know what a “cumpkin” is (maybe that’s for the best, though) or be able to put your finger on the British celebs who are mercilessly spoofed by Herring and company. As was the case with my discussion of the U.K.-specific references in Stewart Lee’s Comedy Vehicle below, I think American listeners can figure out easily enough who Herring is talking about, and who their American pointless-celeb equivalents are.

AITOM has run for two seasons of ten shows (again, the perfect British method of keeping the comedy fresh, as opposed to the American approach, which runs every single comic concept into the ground, for years) and a handful of specials, including a recent “Autumn Special,” which inspired me to write this paean to the program. The visual clips found online don’t really convey what the show is like, so I’ll close out instead with Herring doing one of his most wonderfully blasphemous bits. I think Richard has the right idea — if you’re going to be blasphemous, just go ahead and be fucking blasphemous!

UPDATE (10/23): Since I posted this entry, I've heard two more great podcast episodes from Herring, the first being the initial episode in his "Richard Herring Objects" series found here (as far as I can tell these episodes will only be on the BBC site for seven days after the initial broadcast) and the second "Autumn Special" of AIOTM. Herring shows absolutely no signs of taking a break, so enjoy his productivity now!
Posted by Media Funhouse at 11:20 PM