The end of an era is upon us. This week the MDA announced that it would be cutting the Jerry Lewis MDA Telethon back to a six-hour program. The reasons cited for the move are that the MDA would like the show to be seen on more stations, attract bigger-name talent, and persuade more people to donate.

For those of us who grew up watching the program, and for whom it’s been an annual TV event that signaled the end of summer and the coming of fall, this is a sad little moment. As I noted before on this blog, the telethon belongs to the Sixties and Seventies, the era when variety shows still filled the networks’ schedules, and stars would indeed show up out of the blue on “spectaculars” that mixed the “old” and the “new" (sometimes brilliantly, sometimes ridiculously — but that’s why we loved ’em). 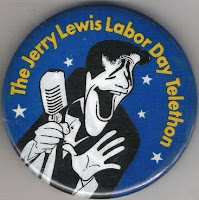 In NYC Joe Franklin leaving the airwaves (both radio and TV) was perhaps the first sign that “nostalgia ain’t what it used to be.” Then The Joey Reynolds Show was dropped from WOR-AM. Now, Larry King is being replaced on CNN (and god knows, his show has been one of the only forums available to "show biz veterans" for years now — who else would spend a full hour with a chuckling and very hyper Liza Minnelli?). With the telethon turning into a six-hour TV “special,” one of the very last outposts for older singers and comedians (and various bizarre “specialty acts”) has now become a show that will most likely try to focus solely on getting guest appearances (very likely on tape or satellite feed) from Vegas headliners and American Idol-style performers (read: pitch-perfect but boring beyond belief!).

It’s not clear from the press release what role the local stations will have in this new “special” shortened version of the telethon. I do hope they will keep the local NYC arm of the show, but I have the feeling that Tony Orlando’s joyous “oldies party” gatherings that have been making the show so much fun in the past few years are now at an end. Which means yet another bit of old-fashioned fun has been killed off. And one thing is definitely for sure: Staying up all night to watch the Jerry’s unpredictable, rambunctious behavior is now a thing of the past.
Posted by Media Funhouse at 11:10 PM