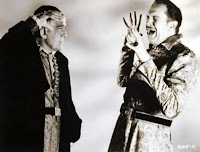 Now that I no longer go trick-or-treating, I still do celebrate Halloween in my own way. It usually includes revisiting the work of the same gents I revered as a young monster movie fan. Herewith, just a brief tribute to the folks who mean “Halloween” to me.

Although I have a high regard for all periods of Karloff’s career, I came to know him as the “kindly monster” in his senior days in the late 1960s. Here is a TV appearance that references his aging horror-star persona, the infamous Route 66 that featured his last time out sporting Jack Pierce’s Frankenstein makeup. He costars with two other horror icons, Lon Chaney Jr. and Peter Lorre:

Karloff worked with Vincent Price on a few occasions, including The Tower of London and Corman’s farcical The Raven. Last night I rewatched the one and only VP as a torturer extreme (with quite a nice outfit) in The Witchfinder General, which can be found in its entirety here (near-entirety, as for some reason the closing freeze-frame and the final credits are omitted — the rest is there). Here is the trailer:

Price also worked with Alice Cooper, my adolescent monster-hero. Here he is doing his immortal “I Love the Dead” (a favorite of Johnny Rotten!) in the concert film Good to See You Again, Alice Cooper:

And a final holiday message from the immortal East Coast TV horror host John Zacherle (still swingin’ at 92). He says it best:

Posted by Media Funhouse at 7:49 PM