Schmaltz in the "new" show-biz: Stewart and Colbert live (part one) 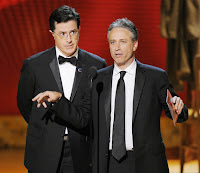 I think and write a lot about the comedians of yesteryear, and have often talked on the Funhouse TV show and in this blog about watching variety shows in the Sixties/Seventies — the idea of all those stars interacting on one stage used to make my little head explode, but now when I rewatch the shows from that era, all I can think about is the mixture of “old” and “new” acts that made those programs semi-surreal and very entertaining (and, let’s be a little serious here, often just terrible — that’s what makes the fun moments more fun). Time can make things that were awful seem more palatable.

Before I attempt to discuss the Stewart/Colbert rally and the “Night of Too Many Stars” broadcast, let me first say I regularly watch and do enjoy The Daily Show and Colbert’s program. I find the latter to be a bit edgier (and more confounding, in terms of audience reaction — more on this later), but both shows are, on the whole, quite funny.

I’ve noticed that older pop culture is kept at arm’s length on both shows — and then, used only as a punchline that can then be commented upon by Stewart (it’s usually Jon who does this), noting that the audience is too young for the reference. Those millions of us watching at home don’t really care what’s happening in the studio audience, but that activity is indeed the focus of these programs; I’ve attended a Colbert taping, and yes, they want you to “scream” — in the manner of Pee-Wee Herman — “real loud!” I like these shows, but comedy that is screamed for? That can easily turn into Dane Cook or the “Diceman.” Gimme laughter every time….

So the past is the past, and it has no place on these two programs, right? Well, not really. Both “The Night of Too Many Stars” and the recent rally TV show (which was the rally itself, and the rally was merely the variety show — as the Singing Detective would say, am I right or am I right?) both seemed to me to not only be the modern equivalents of old Bob Hope specials, but actually were structured comedically in the manner of those old shows. Sure, the hosts and guests delivered their jokes with the degree of snark/sillines that has come to symbolize what Stewart and Colbert do best. But both programs definitely felt like the Sixties all over again — not in the “we can change the world!” sense, but more the American leisure-culture “let me go back to bed” mindset (or, in the Nineties translation, “here we are now, entertain us”).

“The Night of Too Many Stars” raised money for a wonderful cause, and anyone reading this blog knows what the model for a TV show raising money for charity is: the Jerry Lewis telethon. The “Night” show cut between segments shot live at the Beacon Theater featuring a specific pool of talent (which is made up primarily of “comic actors who make really abysmal movies for the multiplex”) and (theoretically) live studio segments with a variety of “name” performers pretending to answer phones.

The Beacon segments had a self-congratulatory tone indicating that you were watching cutting-edge comedy; telethon viewers will recognize this attitude from the Lewis tagline, “You miss a little, you miss a lot!” That cutting-edge included the closing routine/sketch/whateveritwas, wherein Tracey Morgan and Chris Rock (a brilliantly funny standup) did a bit where they sang badly as Simon and Garfunkel and were interrupted by the meanest singer/songwriter in the biz (oops, I forgot Lou Reed is still alive), Paul Simon, who then performed a Snoop Doggy Dogg rap. It was, to coin, a phrase, fucking awful:

All I can compare this awkwardly awful bit of comedy to is the moment where George Burns and Jack Benny came out as hippies on The Smothers Brothers Comedy Hour in ’67 or ’68. The “old meets the new” is at its most sublime as a concept when it is unintentionally funny; when it is scripted, it is just plain terrible. The Morgan/Rock bit was straight out of — you guessed it — a Bob Hope special. And let me clarify for those who are too young to know: the Smother Brothers’ show was always fun, but really only hit its stride in its third season, when the Smothers hired an amazing team of comedy writers. Bob Hope’s specials (random related image above) were pretty much uniformly hokey, schmaltzy, and “old” in their outlook.

I did not see every minute of the “Night” special (life is too short), but the big portion I did see had the same structure as the Jerry telethon: a bank of phones, “please call in now… we need your pledge!”; enlightening video documentaries about the charity itself and care facilities; and goofy stunts performed in both the Beacon and phone-bank segments to raise money. (Jerry Lewis swore he’d take off his pants if a certain amount was hit one year, and so he did; Will Arnett had his “dress” torn off by sexygirl correspondent Olivia Munn).

I’m sure the notion of the team creating the special was to spoof telethons in the phone-banks segments (a la the brilliant SCTV and the very first sketch spoofing the Lewis telethon, done by Steve Allen in the late Sixties), but when they cut to the real video documentary footage, I came to the conclusion that there really is only one way of raising money for a charity on TV, at least if you’re going to try and reach the broadest possible cross-section of the American public (which wouldn’t recognize subtlety if you labeled it as such). The answer is schmaltz, and Jerry’s been doing it now for 45 years straight — and Stewart and the guests on “Too Many Stars” were doing it, too. There may have been a veneer of hipness and “we’re just spoofing telethons,” but it was still Jerry-style all the way, and there was something very familiar about something that was presenting itself as cutting-edge.

A mediation on the “Rally to Restore Sanity” and its similarity to (take a guess) a Bob Hope special will come in part two….
Posted by Media Funhouse at 11:52 PM