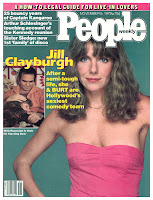 Jill Clayburgh, who died this week at 66 after a reported 21-year battle with leukemia, was one of the poster girls of Hollywood’s late-Seventies feminism. This period found several great films released in a a matter of a few years, all with superb female lead performances. Then, as it always has, the industry pretty much dispensed with those actresses (who were left to return to the stage, or play mothers and girlfriends again), unless of course they were critical super-darlings (Meryl Streep) or the kind of performer who could semi-retire every few years because she didn’t really need to work for a living (the aerobics instructor Ms. Fonda).

I was a young teen when Clayburgh had her string of starring roles and was such a familiar face she was called on to host Saturday Night Live. At that time, my allegiance was to the winsome brunettes who pretty much all got similar roles (Brooke Adams, Karen Allen, Jessica Harper, Kathleen Quinlan, to a lesser extent Amy Irving), but I did see pretty much all of Clayburgh’s starring features in a theater (ah, for the days of “bargain matinees”) and thought she had a compelling presence on screen. (As for my blog-entry header, she was married to playwright from 1979 until her death.)

What’s interesting to reflect upon is the fact that the argument about women not getting quality lead roles continues to this day. The sad truth is that Hollywood is not interested in performances by humans in general, so the gender divide isn’t as important as it once was. Great work is still being done by talented actresses young and old, but the films in question are rarely going to make a dent in the weekend box-office report. And that’s okay — because we know the films that do were all made with the 14–25 market in mind, so they ain’t the kinds of things to take seriously. 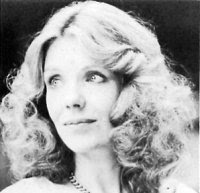 I’ll say farewell to Ms. Clayburgh with a mini-survey of her career up to the early Eighties. She made her film debut in Brian De Palma’s The Wedding Party (1968) (both she and De Palma had gone to Sarah Lawrence; costar Robert De Niro had not). I really love the extremely tacky big-screen adaptation of Portnoy’s Complaint (1972) that she appears in as the Israeli soldier-girl fucked by Richard Benjamin (although that film’s truly tackiest moments feature Mama Lee Grant).

Her first credited TV role was with then-boyfriend Al Pacino in the Jack Warden cop series (and damn, did it move quickly — a half-hour for a show that would run one hour minimum these days) NYPD (1968). Here is the opening:

Other memorable TV appearances include a supporting role on the super-silly old-lady detective show (“hey, if Miss Marple works, why not *two* of them?”), The Snoop Sisters, and the TV movie Griffin and Phoenix with the always wonderful Peter Falk:

The Michael Ritchie satire about football and various ridiculous oh-so-Seventies forms of therapy (EST, “rolfing,” etc.) Semi-Tough (1977) featured Jill Clayburgh with her future Starting Over costar Burt Reynolds (when he was seriously being hailed as a new-model Cary Grant, a few years before the Bandit films came along….). But her biggest success was Paul Mazursky’s time piece An Unmarried Woman (1978). This is a fondly remembered scene where she begins dancing in her apartment for no reason other than sheer joy:

She followed that film with Bertolucci’s incest saga Luna (1979). This is a very strange film, in that Fred Gwynne plays her hubby, who has to die to set the story in motion. Once it’s going, you find that she’s quite a hot young mom who decides to help her son through his heroin-withdrawal suffering by getting him off (did I forget to mention she’s also an opera diva?). I saw this on an “arthouse” incest double-bill with Malle’s Murmur of the Heart at the Cinema Village back around 1980. Ah, for the days when you could have themed double features that had bizarro themes….


After Starting Over — which got uniformly great reviews but didn’t seemingly transform Burt Reynolds into the “next Cary Grant” — she starred in what would now definitely be labeled a “chick flick,” the big-budget follow-up by director Claudia Weill to her terrific low-budget Girlfriends, called It’s My Turn (1980). It was cute and pleasant, but not as memorable as Unmarried Woman. I have no recollection of a single moment of the film but you can see the whole film here, uploaded by a poster who loves Ms. Clayburgh, and also digs Faye Dunaway, Glenda Jackson, and my faves Sandy Dennis and the utterly sublime Barbara Harris.

The same poster has put up a film I have not caught up to (despite having had a prerecord VHS of it now for about a decade), Costa-Gavras’ tale of an American Israeli lawyer defending a Palestinian, Hanna K. (1983), written by Battle of Algiers scripter Franco Solinas.

Another semi-pseudo arthouse release starring Ms. Clayburgh that I never caught up to is also available in its entirety on YT. It is Shy People (1987), co-scripted by the always awesome Gerard Brach, and directed and conscripted by Andrei Konchalovsky. It can be found
here.

Jill Clayburgh kept working steadily until her death in both the movies and on TV, but will be best remembered as the “Unmarried Woman” who got to have an affair with the cool British artist guy (Alan Bates) and still remain independent. And able to dance around the apartment for absolutely no reason at all.
Posted by Media Funhouse at 6:25 PM

As always, a great read Ed! For me, Jill C was always terribly peripheral. I feel like I've known her my whole life, but never saw a single one of her films. Nice to walk down that lane. Thanks!

This is a nice overview. The ones I remember are Griffin and Phoenix (though I wouldn't have been able to name it) and Semi-Tough