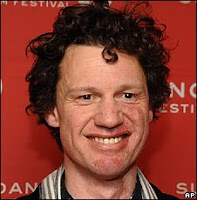 The “hidden” man of British comedy is hidden no more. I was very happy to speak yesterday with Chris Morris — whose career I surveyed on this blog here — in conjunction with the NYC opening of his debut as a feature filmmaker, Four Lions.

Morris has spent a hell of a lot of his career as a radio and TV humorist decimating the interview process, so I wasn’t sure what to expect when I interviewed him about Four Lions and some of his past work. I found that he was more than willing to discuss the different facets of his career, but as notions of process and approach arose, he laughed or made jokes that appeared to sidestep my questions — but then wound up answering them in beautifully eloquent detail. 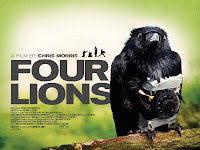 Four Lions follows a group of dimwitted Islamic terrorists in England as they plan an attack on a charity marathon in London. Morris has taken great care in other interviews to discuss the fact that while the film is entirely fictitious, it was inspired by numerous accounts he had researched of moronic — yet obviously lethal — terrorists. I discussed the film’s characters with him and its distinctly dark comic tone. He noted that it wasn’t his intention to make a dark comedy, but that “the real elements in the data that’s out there undermines the metallic, cast-iron image of these people.” The tone didn’t guide the creation of the jokes, therefore, but rather the subject itself dictated the humor.

As for the characters, the film’s protagonist Omar (Riz Ahmed) is a family man whom the audience can relate to on certain levels, while marveling at his wrong-headed and dangerous philosophy — this split in the character is best exemplified by the pleasant-seeming conversations he has with his wife and son about how he intends to die for the cause. His counterpart is Barry (Nigel Lindsay), a temperamental working-class Englishman who follows his own Al-Qaeda-inspired values without question.

“Omar does have a conscience, he believes in right and wrong, while Barry just believes in wrong,” says Morris. “We had a sequence that was cut, in which the characters were playing their subtext cards too openly. Omar tries to argue that sometimes to do the right thing you have to do the wrong thing…. Barry laughs at him because Omar is tangled up in a confused conscience. Barry is happily doing the wrong thing.”

I found that Barry relates to many of Morris’ past comic creations, in that he speaks nonsense with an absolute air of certainty.

Four Lions benefits from a documentary-like visual style that, at points, reports the truth of a situation, and in some others slightly misleads the viewer for comic purposes. Discussing the use of documentary techniques to study a terrorist cell in a fiction film, Morris says: “It’s a long-established technique from at least Battle of Algiers, and probably before…. It’s sometimes good if the camera is left on the table and forgotten. In that way, the camera’s not quite seeing everything it should. When we shot, I worked out the orthodox camera positions and then banned them, and then used what was left.” The result, he says, is that “it’s as if you’re never quite in the right place,” in order to bring the viewer into the action. 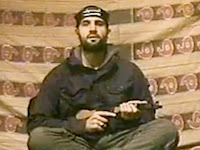 Like Morris’ TV series Brass Eye and Nathan Barley, the film also includes wonderfully ridiculous scenes where its characters interact with new media, including chat rooms, handicams, and cellphone SIM cards. Reflecting on the characters’ repeated attempts to make video manifestos, Morris remarks on a court transcript he read that included MI-5 surveillance on would-be terrorists who argued with each other about whether a video camera should be used to record images, and whether Bin Laden did it.

“So they’re taking elements of Islamic law, and there’s this sort of confused conversation” that winds up with the one gent deciding that Bin Laden must shoot his videos in a mirror, because that would be okay.” Morris adds that he wouldn’t be surprised to find a real-life cell that was making its own video documentary, “because that would excite them, allow them to say, ‘yeah, that’s how we are.’ Unfortunately, I suspect it would show all to clearly that’s how they are….”

Until that particular “idiots’ manifesto” comes out, we can make do with Four Lions, which has Morris again finding the humor in an extremely taboo topic.

As a bonus in this entry, I will note that I also discussed Morris’ past work with him. Segments from that part of the interview will appear in this blog and on the Funhouse TV show in the weeks to come. One of his most direct and enlightening answers came to my question about his radio “feedback reports” (man on the street interviews) which, of course, were later modified to include show-biz celebrities and politicians on Brass Eye. As is indicated by his answer here, Morris’ humor is indeed well thought-out but, most importantly, it’s very, very funny.

I'm so glad the word is spreading here about Chris and his work. I've been a fan of his for a long time, we really don't have his equal in this country.

Well done, MediaFunHouse! Please tell me this interview is available in full somewhere!

Excellent interview, look forward to more. I count us lucky that Morris is still working- IMO, no question one of the most excellent and risk-taking humorists of the later twentieth century (through to today).