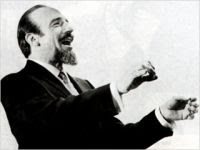 All-American kitsch is deeply engrained in the legacy of Mitch Miller, who died this week at ninety-freakin’-nine years old. As a record producer, Miller was responsible for some early experiments with layering sound, echo chambers, and using unusual instruments to achieve jarring effects. As a musician, he was considered one of the foremost oboists in the American philharmonic world (and how many oboe players can ya really name?). As a performer and TV host, he was perhaps one of the corniest guys this side of Lawrence Welk, presenting homespun entertainment that was dated even as it was being broadcast for the first time.

Let’s first deal with his work as a producer. As an A&R man and producer for Columbia, he did purportedly discover Aretha Franklin and brought public attention to several singers — including Tony Bennett, Johnny Mathis, and Rosemary Clooney — who later went on to do interesting work, once Mitch stopped personally producing them. The long string of hit records that he produced at Columbia during the early Fifties are rather amazing for their corny appeal — I mean, I do enjoy these songs, but they were basically novelty records with more talented singers providing the vocals (not that there’s anything wrong with novelty records, I love many of ’em). The highlights were no doubt (yikes) “I Saw Mommy Kissing Santa Claus,” Rosie’s “Come On-a My House” (which one obit notes Miller wanted Clooney to sing in an Armenian accent, per the original dialect-driven version by Saroyan and Bagdasarian; what she wound up doing was an Italian accent), and the song that will always and forever sound wonderfully ridiculous (Mel Brooks’ satire couldn’t beat the real thing), Frankie Laine’s “Mule Train,” which found Miller playing a wood block to simulate a cracking whip. 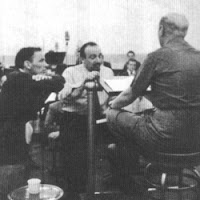 Miller did get Columbia artists their first major hit, but he felt compelled to create a musical “commotion” around ’em. The only one he couldn’t do much of anything for was former big-band vocalist Frank Sinatra, whom he made sing the best/worst jaw-dropper of the Columbia novelty-songs-sung-by-mainstream-singers, “Mama Will Bark,” in which, yes, Old Blue Eyes does make doggy noises to the bored-sounding TV star Dagmar (see link below). “Mama…” actually isn’t the worst Sinatra song from the Columbia period (I have one on a CD that I may never play again ever, which finds Sinatra being forced to do some kind of godawful choral business). Mitch made Frank sing gimmicky dance numbers, like “The Hucklebuck,” but one of the songs from that period is indeed awesome, “Bim Bam Baby” (which most folks know from its use in a Kids in the Hall piece of film). 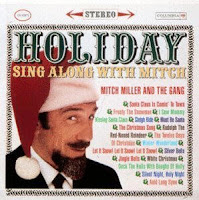 So now onto Mitch’s main claim to fame, the amazing series of LPs and subsequent TV series (1961-64) known as “Sing Along with Mitch.” We had the Miller Xmas album in my house and it was indeed dragged out every year and played (sometimes more than once). The sound of all these male voices singing in unison in pretend-happy voices was at first reassuring, then oddly creepy to me as a kid (what was this, a prison choir?). Mitch’s LPs were calculated to “counteract” the rock ’n’ roll music that he hated so dearly, so you’d get a group of songs that “everybody knew” and in case they didn’t, the lyrics would be included in the album’s gatefold.

I have been told that my uncle (a distant one, and now you will know why) brought one of these suckers over to my grandmother’s house, and had everyone listen to it (few seemed willing to actually sing along with the crap). The tune that particularly tormented my parents was the traditional “Go Tell Aunt Rhody (the old gray goose is dead),” which ain’t fun in even the best of folkie arrangements. So, yes, there was Mitch Miller abuse in my family history, the man’s work brought “smiles” (he loved them goddamned smiles on his TV series) to millions of simple-minded souls, but he and his uniformly-jacketed male singers were just damned creepy, the definite precursor to those CIA plants in “Up with People” (and when are we gonna hear more about that, Glenn Close… huh?). 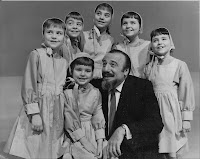 Here’s the hitch, though: I have grown up into an adult who is fixated by camp and kitsch, and so even if I have certain odd sense-memories, I probe the wounds in my present state. And so I will link ya to some Miller MOA-mania. And as you listen, just keep in mind that the same Miller Xmas album I was subjected to as a kid was used by the government to torment David Koresh and the Camp Davidians into giving up their weapons and leaving their compound. And we all know how badly that went.

If we’re going to talk about Miller as a producer, let’s go straight for the throat and have the “singing rage, Miss Patti Page” (oh yes, I listened to William B. Williams as a kid) sing her big hit, “How Much is that Doggie in the Window?”

Without further ado, here is the record that Sinatra hated until his dying day, the aforementioned “Mama Will Bark”:

And because nothing beats singing the bizarreness that was “Sing Along With Mitch,” I urge you watch at least a few mind-numbing minutes of one YT poster’s panoply of Miller episodes. Here’s a good introduction. And what WAS up with Mitch's weirdo method of conducting? (Facing *away* from his singers...):

But if you need the old Sixties variety-show incentive of a guest star, here is a show with George Burns guesting:

Uncle Miltie shows up on this one:

And, in one of the odder convergences of wholesomeness, the grown-up Shirley Temple guest-stars and does sing here:

Posted by Media Funhouse at 7:13 PM