“The morbid urge to gaze”: How the Chelsea Clinton wedding is connected to stylish movie murders

I haven’t got the slightest bit of interest in the recent wedding of Chelsea Clinton to Mark Mezvinsky. However, if you can hook that over-examined and discussed media event in with one of the best thrillers ever made (strike that, and just say one of the best films ever made), Michael Powell’s Peeping Tom (1960), THEN I’m interested. 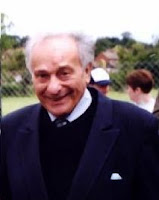 And how exactly does all this relate to Powell’s masterpiece about a man afflicted by “scoptophilia”? (Described by one character so memorably as “the morbid urge to gaze…”) Well, Marks’ work as a code-maker and poet was only part of his legacy (besides the fact that he grew up as the son of the man who ran the famed bookstore located at 84 Charing Cross Road). In the 1950s, he became a playwright, and then began writing movies (including the blissfully titled Twisted Nerve, which I hope very much to catch up with some day). His masterpiece without question is the screenplay for Peeping Tom, which is commonly thought these days to be a perfect thriller, but was in fact the work that completely ruined the reputation of the well-regarded Powell (the most-quoted contemporary review said that the best way to dispose of the film would be to “shovel it up and flush it swiftly down the nearest sewer. Even then, the stench would remain.”). 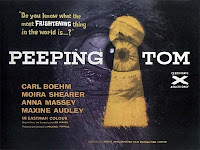 The film was hailed in its time by French critics (yeah, the same perceptive ones who get lots of grief from doltish Americans for enjoying the comedies of Jerry Lewis, but first cemented the reps of Ford, Hitchcock, Cassavetes, Altman, et al, et al), including Bertrand Tavernier. By the late 1970s the film was being restored and “presented” by one of its biggest fans, Martin Scorsese (who borrowed liberally from its final tableau for the big shoot-out in Taxi Driver).

Thus, a lovely little poem read in an innocent way at the insanely over-scrutinized wedding of a President’s daughter to a guy no one has ever heard of (or cared about) was indeed the work of the same man who gave us the single grimmest depiction of a life ruled and ultimately destroyed by filmmaking — plus one of the single coolest murder weapons in the history of cinema (if you haven’t seen the film, you owe it to yourself to watch it as soon as possible). A nice little daydream news event linking to one of the best filmic nightmares of all time. Now THAT’s the kinda story I’m interested in….

The best news for those who haven’t seen the film is that it is currently available in its entirety on YouTube in the restored version that was released by the Criterion Collection. The yobs who put it up decided to disable embedding (a better way to force you to see YT’s ads on the page), but the film is available for instant viewing here.

Oddly enough, yet another upload of the film is available here:

Here is the original British trailer for the film. No one in England knew what Powell was unleashing upon them...:

Posted by Media Funhouse at 6:12 PM