…and God Against All: Deceased Artiste Bruno S. 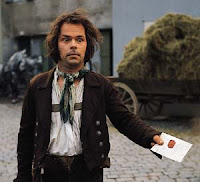 I am a deep disciple of the work of Werner Herzog, but every so often his films hit a disturbing note because the viewer becomes aware that the person onscreen may or may not be aware of how they are being used in Herzog’s strange and brilliant film world. This is most prominent in his documentary study of the blind and deaf, Land of Silence and Darkness. And it also is the case with the two very raw starring performances he got from street musician and all-around strange person Bruno S., who died this week at the age of 78. Bruno did seem aware of what was going on, but the emotional changes his characters go through have an incredible resonance that comes from the actor’s own deep perception of his character’s situation and how it mirrored his own real life.

Bruno was an incredible personality onscreen, as Herzog used him pretty much for what he was — a bright and imperturbable person who apparently suffered some mental and/or emotional disability. His obits this week noted the exact nature of that disability, and it is indeed as sad as the fate his characters confront in his two films with Herzog. Born Bruno Schleinstein, it is reported that his prostitute mother used to beat him as a little child, which made him temporarily deaf. He was committed to an asylum during the Nazi era, and was the subject of experiments conducted on mentally disabled children. 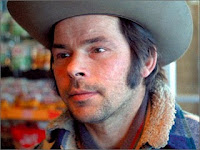 The savvy that Bruno showed onscreen, despite his handicap, was perfectly showcased by Herzog who starred him first in The Mystery of Kaspar Hauser (1974), which was released in Germany as “Every Man for Himself and God Against All.” Bruno was the perfect incarnation of the real-life figure who lived his whole life in a cellar and then emerged to innocently experience the world as an adult. Herzog wrote Stroszek (1977) expressly for Bruno S., and it is one of his masterpieces: the story of an unusual street musician who leaves Germany with a prostitute (the wonderful Eva Mattes) and his landlord, only to land in Wisconsin, where they are as alien and alienated as the dancing chicken seen in the film’s indelible final scene.

As a tribute to this unusual and extremely earnest and sincere performer, here is the trailer for a documentary made about him in 2003 (without English subtitles). This is the only feature he was in since the Herzog duo:

Here Bruno confronts logic in the guise of Kaspar Hauser:

A gorgeous scene from Stroszek that shows both what a great writer Herzog is and also what a fine actor Bruno was. Here he discusses those people who “hurt you with a smile”:

And because we should end on an up note, here is a scene from the same film in which Bruno lets loose on his chosen instrument, the glockenspiel. This is how he earned his living since the Herzog films many years ago, along with art he made that was indeed exhibited in galleries:

A final, newer clip of Bruno singing and playing: