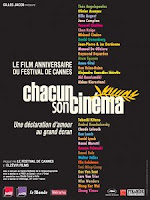 This blog mostly functions on a separate level from the Media Funhouse cable-access show I do here in Manhattan, but every so often I feel compelled to put up a post supplementing what I’m doing on the show that week. In this instance, I’m presenting some terrific shorts from the anthology film Chacun Son Cinema, which very much needs to have a distributor over here.

The film was conceived of by Gilles Jacob, the head of the Cannes Film Festival, to celebrate the fest’s 60th birthday, and the filmmakers who participated are a roster of the best contemporary talents. Their names can be found in this trailer for the feature:

Some pieces of the film are available online, including two of the segments I’m showing this week, the contributions by Roman Polanski (a great comic bit of business) and David Cronenberg (making a pungent, and very depressing, point about the state of cinema). Also available on YouTube are the press conference for the film, with many of the filmmakers in attendance (the clip is unfortunately dubbed into Italian, so the English interviews can’t be understood, unless you’re fluent in Italian) and a totally non-verbal bit of Cannes fluff (again from Italian TV), the red carpet entries of the the filmmakers at the premiere.

Also of interest on YT is one missing segment from the feature. There are only two contributions by American filmmakers (which gives an impression of how much the gents in question are respected by the festival), one from David Lynch and another from Gus Vant Sant (both shorts, in my humble opinion, are interesting but gimmicky and seem to have been “dashed off”). The third American filmmaker is actually a pair, those Coen guys, who did something that is quite charming and actually more in league with what the other filmmakers in the anthology did:

At its best, Chacun Son Cinema communicates the deep emotional connection that great movies make with their audience. The range of ways in which this is expressed by the contributors — and the wonderfully creative ways in which tributes are made to Chaplin, Bresson, Fellini, Godard, and Fred and Ginger, among others — make the picture “essential” viewing, but, as noted, it is sadly “unfindable” in the U.S., unless one orders an overseas disc of it.
Posted by Media Funhouse at 11:40 PM