Turning Japanese (for a paycheck): Celebs in '80s TV commercials 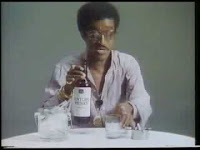 For almost four decades now, the Japanese have been luring American and European celebrities to do their ads with big paychecks and the promise that the commercial will only be aired in Japan. Of course now with YouTube, nothing is country-specific, and so posters like this one provide with endless amusement.

This gent seems to have specialized in collecting Japanese ads from the Eighties, so forthwith I present these kitschy little items:


Jodie Foster (to the tune of “She Drives Me Crazy”):

A very shabbily dressed Peter Falk (and would we have him any other way?):

The personification of class, Marcello Mastroianni:

Mickey Rourke, with his original face:

Even more gawky studliness from Tony:

And since we’re in the Eighties, we need some of the stunning ladies of that time. First, Nastassja Kinski:

The fantasy of every teen boy at that time, Phoebe Cates:

And a little more Sir Sean:

To close out, I return to the kinetic and busy-as-fuck Mr. Sammy Davis Jr. If you thought he was ubiquitous on U.S. TV when we were young, he also blitzed the airwaves in other countries. Here he’s older and pitching coffee and something called “the stick”:

There are two versions of this one, a longer one that loses sound midway through and this twangy sucker:

From a 1974 campaign, where he pitched whiskey and did impressions. Here it’s Bogart:

A dance video, with the trademark “con-chicki-con-con”:

Posted by Media Funhouse at 6:33 PM

What, no Charles Bronson for MANDOM spots?