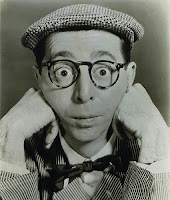 During my “exchange student” college studies in Paris dozens of light years ago, I remember looking up what was playing in the city in Pariscope, the listings magazine, and seeing that The Man With the Golden Arm was being revived. Only two cast names were included in the write-up: Frank Sinatra and Arnold Stang. For some reason the French copywriter had skipped over Kim Novak, Eleanor Parker, and even the awesomely campy Darren McGavin, to get right to the sidekick to end all sidekicks, the man we knew as… Stang!

Today a very good New York Times obit appeared to pay tribute to the Stang, but major fan-archival work was done by a gent named Kliph Nesteroff in an article found here. Stang moved from medium to medium as a young comic performer: he started work as a kid in radio on “Let’s Pretend” and “The Horn and Hardart Children’s Hour,” then moved on to movies, went back to radio working as the sidekick for one of my faves, Henry Morgan. He then shifted over to TV, where he eventually became Berle’s sidekick (he had worked with Uncle Miltie on radio), and then moved between the worlds of TV, movies, and cartoons, where his crazy voice was heard for decades, most particularly on Top Cat.

Stang’s voice will live on and on, and he is probably best known as an actor for having appeared in It’s a Mad Mad Mad Mad World. Here are some clips of Arnold at his best. The first being the absolute best, him telling off his boss, Milton, on a Berle Xmas episode:

Stang also did the game show circuit. Here he is on the show The Name’s The Same. My fave fun fact about this series, besides the fact that Bob and Ray hosted a half-season in quite a bizarre fashion (sometimes confusing the hell out of the studio audience), is that when Stang quit he was replaced by a very similar personality… Basil Rathbone!

The Man with the Golden Arm was never copyrighted for some bizarre reason, and so it is up on YouTube in its entirety. Here is one posted version of it:

An odd assignment for Arnold: starring with Leo Gorcey and Huntz Hall in a country comedy called Second Fiddle to a Steel Guitar (1966):

And here is the man himself, talking about his work on Top Cat:

Two of the strangest films Stang was in are available in their entirety on YT: Hello Down There, a “with-it” comedy that wasn’t so with it, and Hercules in New York, which starred a young, dubbed, and renamed Arnold Schwarzenegger (“Arnold Strong” starred with Arnold Stang).

And to close out with some tip-top visuals and audio, here is an amazing collage of Stang photos assembled by Kliph Nesteroff for his great article on the gent. 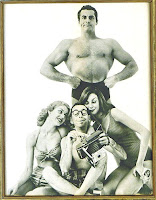 For the final bang from Stang, here is my re-upload of some wondrous record collector's posting of his novelty 45, "Where Ya Callin' From, Charlie?" If anyone knows who the original poster was, I will most definitely give them credit:

Posted by Media Funhouse at 6:00 PM

I don't know if Arnold Schwarzenegger tried to give Arnold Stang a "lift," but look who did?

That's 50's glamour girl "Irish" McCalla, as Sheena of the Jungle, hoisting Arnold backstage at the Milton Berle show. (She really WAS Sheena, wasn't she?)