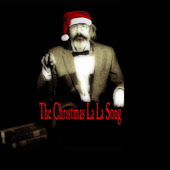 I stand by what I wrote last year about the oppressivesness of Christmas music, and the coldly corporate notion that the finest (mostly long-dead) American singers can only be dredged up out of the collective unconscious once a year, and ONLY as purveyors of that dreaded canon of the same four or five dozen songs.

However, every so often a Christmas song comes along that is not offensive to the ears, and is in fact chronically catchy, and becomes something I actually enjoy humming obsessively. That tune is innocently titled “The Christmas La La song,” and can be found here. It comes to us courtesy of Sherwin Sleeves, the storytelling alter-ego of New Hampshire writer-performer Sean Hurley. I rhapsodized about Sean’s work months ago on the blog. Sean’s audio podcast Atoms, Motion and the Void remains my favorite original Web creation, a brilliant mixture of fine storytelling, old-time radio, carefully chosen (and created) music, genuine emotion (without sticky, Spielbergian sentiment), and an indelible lead characterization. Catch up with his work at the Atoms, Motion site and his blog.

Though you should hear “The Christmas La La Song” as an audio file first (and should buy it at iTunes — Sean is a truly independent artist), there is a modest computer-animated video for this very modest and catchy Yuletide tune:

The mighty horse rocks a fat ass ron and fez yo!