"What Is It With You Blondes?": Deceased Artiste Val Avery 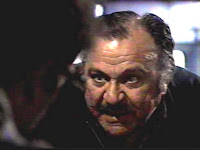 Val Avery was not a handsome man, but he was one hell of a character actor. Avery died at 85 this week, and I’m sure his grizzled visage will be impressing movie watchers for years and years to come.

He was of Armenian extraction (real name: Sebouh Der Abrahamian), served in WWII, and was in over 100 movies and 300 television shows. He had several prominent character parts in everything from Hud to Donnie Brasco, but I will always remember him for his powerful scene-stealing bits in Cassavetes’ films. He worked with him in five episodes of Johnny Staccato, and then had featured parts in five of the features JC directed. I already mentioned this in a previous blog entry about character actors, but I treasure Avery’s scene in Minnie and Moskowitz (1972) as the blind date from hell. It is a case study in how to steal a movie in less than four minutes:

Posted by Media Funhouse at 1:13 AM