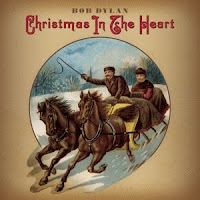 At the intersection of genius, calculation, and batshit crazy, there is Bob Dylan. His latest oddball career move — after the “never-ending tour,” the Victoria’s Secret ad, and Masked and Anonymous (not forgetting the years of Xtianity, Renaldo and Clara, the white face-paint and the wacky Nashville Skyline voice) — is the Xmas album Christmas in the Heart. The album gets my vote as funniest CD of the year, and not because of its cutesy, fun, upbeat numbers like “Must Be Santa Claus,” in which Bob channels Mojo Nixon, the Leningrad Cowboys, Gogol Bordello, and just about every polka band in his native state of Minnesota.

The element that does make the album tilt into the humor category is Bob’s croaking of solemn hymns and carols. Plainly put, Bob has smoked his voice away to a froggy, gravelly level that would make a pro wrestler (or a homeless man on a subway platform) proud. In his last few, masterfully written albums, he’s occasionally revealed the sediment at the bottom of his vocal cords, but on the Christmas album, he intentionally goes for note after note he can’t possibly hit (and never could), just to go into full cringe-inducing (or, alternately laugh-inducing) rasp-and-gargle. There are numerous examples of this, but the finest have to be the “I” in “I’ll Be Home for Christmas” and pretty much all of his “O Little Town of Bethlehem.”

The closest comparison I can provide for this album are the final Sinatra studio recordings, all done in one afternoon for the two Duets albums. Those albums were “stunt” creations, and the one-time perfectionist Frank just ran through his “assignments” until his voice was gone… and they kept recording, and they released the results.

I don’t think Dylan has reached the point where he does everything in a single afternoon, so why sing a bunch of songs with a range that shows the ravages your throat have gone through? Well, there are a number of factors here: the Dylan “brand,” which Bob himself has kept going for years — meaning he has made four to five times the albums of his peer singer-songwriters like Leonard Cohen, Joni Mitchell, Tom Waits, and Randy Newman — but they’ve never once dropped a true stinker like a few of Bob’s Seventies and Eighties LPs; the destruction-of-mythology factor (which I've discussed with my friend and webmaster), in which Bob, like Brando, wants you to know he can still produce solid works of genius, but often chooses not to (or decides to simply deconstruct/destroy something he knows the fans and critics hold dear); and yes, random ridiculousness. A nice country-western Xmas album would’ve been very welcome. Christmas in the Heart is one-third a rouser, and the other two-thirds the willful act of perversity everyone expected it would be.

That said, you can download the album at the Zinhof blog (Rapidshare link is down, but the others aren’t). It’s better if you buy it, since Bob is donating some of the money he earns to charity, but I can well understand if you don’t.
Posted by Media Funhouse at 2:16 PM