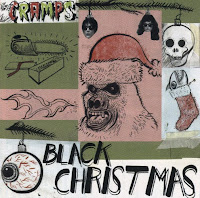 As I noted in a lengthy post earlier this year, the celebrity death I was the most depressed about in 2009 was that of Lux Interior of the Cramps. This was because Lux and his wife, the ageless and mega-awesome guitarist Ms. Ivy Rorshach, not only created one of the seminal punk/rockabilly/comic-book/horror groups back in the mid-’70s, but because they were rabid musicaholics who introduced myself and their other fans to countless forgotten garage, rockabilly, r&b, and (ah, yes!) novelty acts that we never would’ve discovered otherwise in the Seventies and Eighties.

The Cramps have been ignored when it came to the creation of the “Underground Garage” concept (and I am, by the way, a fan of the UG radio show and live shows). For me and countless others, Lux and Ivy were as important to our discovery of garage music as the Lenny Kaye Nuggets two-record set (in fact, in some cases like mine, we discovered the Cramps first, then Lenny’s great compilation).

Thus I am constantly heartened by the work of a devoted Cramps fan who is known as “Kogar the Swinging Ape” (after the wandering monkey in Rat Pfink a Boo Boo). Kogar has put up 13 collections of “Lux and Ivy’s Favorites” in various places on the Net, always for free and always mind-blowing and thoroughly entertaining (containing music that belongs both on oldies radio and in the UG). He now has put up a collection he says was created by Lux himself and given away with a magazine at one point. It is called “Black Christmas” and can be downloaded at the “WFMU Ichiban” blogspot.

Go get it now at the Ichiban site.

In the meantime, I’ll close off by lamenting the fact that we blogspotters have no idea of each other’s presence unless we go “digging.” I wish the folks running Blogger would create a tighter sense of community, so those of us who dwell in the same swamp of vintage pop-culture obsession could find each other more easily. I discovered that this recent-vintage WFMU blog existed through a bulletin Kogar put on the dreaded (gasp) MySpace, which has forfeited its “go-to site” throne to the comfier-for-old-folks Facebook. I’m glad I found it in any case, and urge ya to partake of yet another slice of Lux’s exquisite taste in heaven-sent rock ’n’ roll.
Posted by Media Funhouse at 2:32 PM