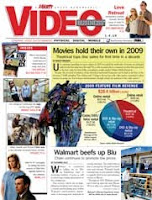 As if any further indication was needed that the DVD industry is in a tailspin, I sadly note the death this week of the trade publication Video Business, which much to my delight had kept its original name all these years (hey, the “V” in DVD does stand for “video”). In a weird way, the home-entertainment industry has seen nothing but deaths in the past decade or so — most interestingly, the chain that set out to decimate the mom-and-pop store in the Eighties (the dreaded Blockbuster) has now fallen victim to Netflix, a notion that requires the absolute minimum of activity on the part of its customers (ah, the pure American-ness of not having to actually *do* anything, and yet still be a consumer!)

For full disclosure’s sake, I will note that I have been writing for the magazine for approximately nine years as a freelance reviewer and reporter. But I began reading it when I worked at a video store back in the late 1980s and later on, when I worked at the most famous (and still curiously alive… why?) TV listings weekly, I returned to VB as a reader because we were desperately in need of finding someone, *anyone* who actually was watching the crappy straight-to-video features (Shannon Tweed, Don “the Dragon” Wilson, Jeff Fahey, Shannon Whirry, et al) that we couldn’t evaluate because the cable nets showed ’em but were never going to provide screeners of them.

Video Business has filled that void for thirty years, and yes, these days you can indeed find a stray blogger who will review the same material for free and perhaps even in more depth, but it just ain’t the same, since VB often actually panned the freaking things, and their reviewers (I’m talking a decade before I had any participation in it) seemed to be folks who knew their bad films (and, more importantly of course, their good-bad films). Bloggers generally know their topic backward and forward, but they are a tad cautious to pan things they are getting for free from cordial publicists. 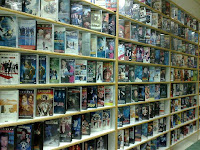 In any case, Video Business issued official word on Wednesday that it ceased publication this week with its current issue, December 4th. As a regular reader of the magazine, I think that it’s a major loss, since I notice several movie-news websites simply tossing up DVD label press releases with no fact-checking or follow-up calls involved. VB has been a reputable source of home-entertainment industry news, even as its happy stories about new horizons in technology were turning to revelations about the ways in which its readership — namely, the local video merchant — were being squeezed out of business by the lazyman juggernaut that is Netflix. I’ve heard that the magazine’s website will go offline, which is a major loss since the magazine covered titles that weren’t being reviewed anywhere else.

As a writer for the publication, I extend a personal thanks to editor and good friend Laurence Lerman, who’s done a terrific job of covering the disparate threads of an industry that’s gone in some very strange directions in only two decades: from a glut of “straight to videos” (with titles like Indecent Deadly Bloody Fatal Illusion), to rather luster-less “DVD premieres” (not ANOTHER Dennis the Menace sequel that no one knows exists?), to crystal-clear BluRay restorations of the same films that have been out umpteen times before. Laurence is a class act who has been one of the best editors I’ve had the pleasure to work with. His sweet tooth for kitsch aside (why do you think we’re friends?), he has exhibited a special talent for juggling both the “high” and the “low” in VB’s movie-review section; this aspect made it a very important read for DVD retailers around the country. And yes, there are still some mom-and-pops bravely weathering the slow, strange death of the home-entertainment industry. They deserve your business right now — get up off your asses and forget the Netflix envelopes and *rent* a movie in person, fer chrissake!

And so I raise a glass in toast to Laurence and the other folks who like myself have toiled in any capacity for Video Business. I can’t imagine future news-sources of info about movie “platforms” (Download Business???) ever being as adventurous, or as worth reading.
Posted by Media Funhouse at 12:34 AM

I hate myself for mentioning this, but in fact the "V" in "DVD" does not stand for video. The acronym stands for "digital versatile disk."