When "Stinky" Met Sky: "The Mothers-in-Law" 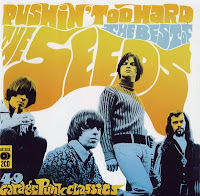 Two posters have already uploaded to YouTube the legendary moment when garage rock burst onto America’s TV screens in the odd guise of a “hippie band” appearing on a very square sitcom: the Seeds, led by the late, great Sky Saxon, doing their hit “Pushin’ Too Hard” on “The Mothers-in-Law,” the Desi Arnaz-produced sitcom starring Eve Arden and Kaye Ballard. One upload is here, my own addition folllows... (the color on the first clip is very washed out)

Now that’s all well and good, but I noticed that no one had uploaded the episode’s finale, in which the Seeds encounter a certain Mr. Joe Besser, the fey-est Stooge and well-known as grown-up man-child "Stinky" on The Abbott and Costello Show. Thus I provide the missing link. And just in case this sitcom meeting of immortals isn’t weird enough, let me just note for the record that Desi himself directed this episode. The Sixties were a strange, bizarre time for popular culture….

Posted by Media Funhouse at 1:40 AM

Wow ... thanks so much for posting this. I had no idea my husband and his band, The Seeds, had been on a 2nd episode of the mothers-in-law ... this is hilarious .... Thank you for helping keep the name, legacy, and music of my husband, Sky Sunlight Saxon ... alive. I am dedicated to this. Thank you so much. LOVE LOVE LOVE

Thanks so much for the note, Sabrina. This is in fact from that same episode -- I just wanted folks to see the end of the "plot" (as it were) and the fact that the Seeds (NEW culture) met one of the Three Stooges (OLD culture), and somehow our heads didn't explode (mine nearly did when I first saw the full show again after 30 years....).

Sky was an original and the Seeds broke barriers. He will not be forgotten.