A Part of You: Gumby and Deceased Artiste Art Clokey 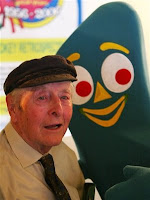 I deeply loved Gumby as a child. I still love the little green guy, because his creator, Art Clokey, who died this week at 88, was a wonderfully imaginative individual who subtly injected the Sixties zeitgeist into the minds of children like myself. This is not an insignificant achievement — especially considering that his other contribution to pop culture was the extra-sedate, morally balanced, and too often preachy Davey and Goliath. 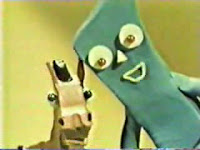 Cloakey’s mythology has been explored at length: how his biological father’s odd “tilted” hairstyle inspired Gumby’s odd-angled head; how he was going to make religious films until he studied under avant-garde master Slavko Vorkapich and came up in 1953 with “Gumbasia,” a blissful mindfuck of colors, shapes, and patterns, all rendered in clay. The three-minute short was purely inspired by earlier works of cinematic art. Clokey said that he didn’t even try a hallucinogenic drug until *after* he had completed the first series of Gumby episodes:

In 1956, he created his first Gumby short, which premiered on the Howdy Doody show (I can’t imagine what it looked like in b&w, seeing as Gumby was always a multi-colored sensory assault). From that early era, here’s “Gumby on the Moon,” one of the many shorts where Gumby doesn’t talk. I love the free-form weirdness of the Fifties shorts, but wasn’t a fan of the sloppier-looking Gumby (I was too used to his later, sleeker incarnation):

The character continued on until 1959, but was fully, er… fleshed out in the Sixties, from ’61-’63 and ’66-’68, when warped children like myself were treated to the color adventures of Gumby, his pony pal Pokey, and the evil Blockheads, who were always around to totally undermine and destroy, for no particular reason other than that they were evil, and very, very square. From that period, I give you the theme song burnt into all of our brains:

One diehard fan has put up several Gumby shorts, but I should also draw your attention to the documentary Gumby Dharma. Here is a clip in which Clokey talks about becoming a middle-aged hippie and experimenting with drugs:

From the Sixties, we jump ahead to 1988, when a new series of Gumby adventures was created by Clokey (a few years after Gumby came back into the public consciousness, thanks to Eddie Murphy's characterization on SNL). I will openly admit that I was unemployed in 1989 for some weeks and became hooked on these episodes, as they were the strangest viewing experience one could have watching commercial television (and did not require the ingestion of any sort of chemical). At that time, Clokey recognized what the hot trends were, and so one adventure found Gumby preparing to make a music video with his band:

And to close out this post, I want to mess up your minds the way Clokey messed up mine. First, you need to see “All Shook Up,” a 1968 short that finds Goo and Prickle, Gumby’s pals, performing a “modern music” concert. Goo and Prickle were intended by Clokey to represent Alan Watts’ two states of being (the fluid and the rigid), and so for this concert, Prickle, the male dinosaur/dragon plays a note on an instrument and Goo, the seal/fish-like female turns into a visual representation of it. This is some VERY STRANGE stuff to watch when young. Clokey was oh-so-subtly working on the developing minds of his kid viewers.

And, finally, a fascinating Gumby adventure called “Funtasia,” which Clokey did not make, but his influence is felt throughout. This must hail from the 1988 series, and it’s an evocation of the 1950s shorts with no dialogue. Here a character perplexes Gumby and his pals by changing shape every few seconds. I’m certain that Bruce Bickford (of Baby Snakes and The Amazing Mr. Bickford fame) — whose stop-action claymation is the freakiest and most imaginative work I’ve seen intended for adults — was heavily influenced by Clokey’s ground-breaking work in the Fifties and Sixties. And, of course, drugs can enhance the experience, but are not at all necessary.

You should check out Bobby Charles he died recently. He was a really great unrecognized artist i think you would like his music if you check it out.