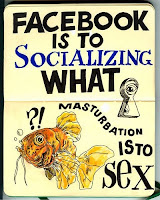 There is much “news” on the Internet these days about the privacy violations perpetrated by Facebook. I find it funny that people feel "violated" by the site, since it never says explicitly (c’mon, let’s be honest) that it will protect your information, your identity, or your creations — it exists simply to link people up, and to generate page views for itself.

Facebook is the hottest Internet “community” currently, but like YouTube and MySpace, it is an attempt to gather users together to create a hub of Internet activity. The site came into existence with classically American rules about “obscene” materials. To wit, nothing with any nudity on the site. Filthy language okay, unclad bodies never ever — the U.S. steadfastly refuses to grow up, it ain’t happening, no way no how. We like bein’ the all-powerful, church-going hypocrites we pretend to be.

I’m on all three sites mentioned above, as I am here on Blogspot — where I’ve found a lot of freedom, thus far. I’ve never been so delusional as to think that there is actual free speech on the sites, though, or that what I’m doing is not being “tabulated” for consumer demographic use. Although we pay nothing to use the sites’ storage capacities, we provide them with that most valuable of all commodities on the Internet, content.

I am still very amused by the abandonment of MySpace by most of its users (except musicians and other entertainers, who need the free storage space for audio). That can be most readily attributed to the laziness factor — which is as intrinsic to American life as the hypocritical prurience mentioned above. Middle-aged and senior users find Facebook easier to use since you don’t have to find a “wizard” to build a page, and there is a pretend “gate” around the “community,” so one can pretend one is really only in communication with the folks one chooses as “Friends.”

The gate is fake, the community is fake. Only the communications between users and, yes, the content is real, so let’s just focus on that and not pretend that a corporate-run site really gives even one-millionth of a shit about the safety of its users’ personal information. This is the Internet after all. It’s all a big farce, but a fun one, so let’s be honest and acknowledge the game we’re playing.
Posted by Media Funhouse at 6:50 PM