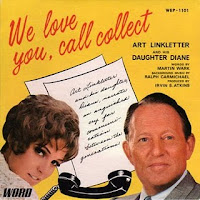 Usually I’m filled with a sort of reverent wistfulness when I write about a celebrity who has died, but I have to admit at the outset of this post that I always felt that Art Linkletter’s most prominent trait on TV was his sanctimoniousness. His interviews with kids were way cloying, his hosting benign, and his comedy… well, it wasn’t really comedy. He was involved in the creation of Groucho’s You Bet Your Life, so he somehow participated in something I really enjoyed. His own stuff? As the kids nowadays put it, “meh.”

Linkletter was openly conservative, and seemed like the very definition of the old guard, a narrow-minded gent in every way. He lived to 97, but spent the better part of his time in the media in the last 41 years preaching against drugs. He blamed the 1969 suicide of his daughter Diane on LSD, even though it wasn’t found in her system upon her death. He made it his personal mission to “save” America’s youth, and warn parents that their kids were indulging in dangerous, nay lethal, behavior. Throughout the crusade he never appeared to me to be dismayed by his daughter’s death, but rather seemed like an opportunist exploiting her demise to create a new identity for himself, one that allowed him to condemn the drug culture, and by extension the liberal “permissiveness” of the Sixties and Seventies. Perhaps there was grief behind his crusade, but in his TV appearances, you merely saw a hateful older man who had decided that the villain that killed his daughter was the demon “drugs” and not her own inner turmoil (or perhaps his own bad parenting?).

John Waters’ joyously dark short “The Diane Linkletter Story” is no longer on YouTube (ah, now there’s a piece of nasty-assed satire), but I can offer you an appearance by Art selling “Circus Nuts” on a TV ad with Diane:

The solid-gold shameless 45 that Linkletter put out after his daughter’s death, a melodramatic spoken-word recording (that subsequently won a Grammy) that he had recorded with Diane about a father’s anguish over his runaway daughter. Corny as fuck, startling kitsch, but only because Linkletter meant it to be heartwarming and sincere, and was in fact exploiting his kid’s personal trauma. This recording is used in the soundtrack of the Waters movie, and yes, it does seem to imply that any girl who’s forced to participate in the recording of a bummer like this would’ve wanted to off herself:

And to close out, a pretty amazing bit of early “ambush TV,” in which host Stanley Siegel (wherever did he go?) “sandbags” Dr. Timothy Leary with a call-in from an outraged Art Linkletter. I agree with Leary that the ever-pompous Linkletter made a living off his daughter’s death. Siegel allows Linkletter to tell off crazy ol’ Tim at length. Art also condemns the Jefferson Airplane, Allen Ginsberg, and the whole hippie culture — he truly was one of those folks who was outraged that the youth culture of the Sixties ever happened, and set out on this crusade to assuage his own guilt or emptiness, and to find a “cause” that could indeed prolong his long-dormant career.

UPDATE: Dick Cavett confirms that, despite hosting a show called People Are Funny, AL wasn't a funny guy at all. Here is his account.
Posted by Media Funhouse at 12:52 AM

I enjoyed your post. I have mixed feelings about Mr. Linkletter - I watched his show as a kid, enjoyed it, but of course it's really the kids who made it interesting. Smug condemnation without offering something better is annoying I agree. I adored Jefferson Airplane but also think there are problems with tune in turn on drop out - I was young in the 60's - now I know that every Extreme is just a kind of corrective - to take enough of it to get back on track - if you surrender to any Extreme, you just get out of one set of problems and into another.

Anyone who lives to 97 with all his marbles is kind of a hero to me - and he did have a hard knock in youth, I forget exactly, his parents put him up for adoption then came calling when he made money.

Also - when you take a really hard hit, like the death of a child - it's very hard not to find a donkey to pin the tail on - the only way to carry on at first - he had to blame someone - other than himself of course - to keep living - if he loved her.