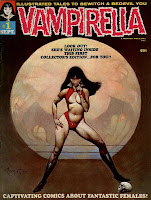 I am not personally a collector of the work of Frank Frazetta or Lena Horne, but I certainly admired and respected them. In lieu of obit tributes, I’ll simply link you to some clips and images.

Good galleries of Frazetta’s work can be found at two tributes sites, one put up by a fan and one put up by his family. His work on movie promotional materials is fascinating. Most movie buffs are aware of his self-referential poster for the Eastwood movie The Gauntlet:

But fewer knew he did this promotial image for What’s New Pussycat? (I didn’t, and I have the paperback with it on the cover somewhere):

And he also did this dramatic poster for Polanski’s Fearless Vampire Killers:

And when it comes to the beautiful and talented Ms. Horne, there is little I can say to add to the chorus of praise, so I will spotlight her 1953 appearance on the beloved What’s My Line?:

Her duet with Funhouse deity Sammy Davis Jr. (audio only — they apparently never appeared on TV together?):

And with another Rat Pack member. Lena guests on The Perry Como Show with Dean Martin:

One of her last appearances in a fiction film, in The Wiz, directed by her son-in-law Sidney Lumet (who is a superb director, but may not be the best choice to helm musicals):

And another flashback to that weird period when the “old” met the “new.” Lena covers McCartney’s “Maybe I’m Amazed,” and makes it her own. Why? Who knows?

And remembering her at her all-time prettiest, acting and singing in the two-reeler Boogie Woogie Dream from (1941)

Posted by Media Funhouse at 8:43 AM