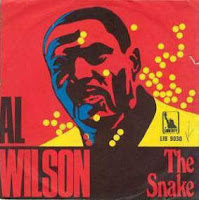 The Internet is filled with misinformation, rumors, urban legends, and in-depth info about stuff of no meaning or consequence. On the other hand, it holds untold wonder, lots and lots (and lots) of quality free stuff, and, yes, it solves bar bets, arguments, debates, trivia contests, and that hunt for a specific dimly remembered song lyric. I was in the last-mentioned mode the other day, when I just had to sort out what song it was that included the lyric, “…sssssighed the snake…” Within a few clicks I had encountered this 1968 one-hit wonder by Al Wilson that is as catchy as hell:

Hadn’t heard it on the radio in a few decades now, but it was coursing around somewhere in the back of my mind. Of course, the song brought up a certain movie scene that also can’t be forgotten. The question arises, though: why is the same story told by Orson Welles in Mr. Arkadin about a frog and a scorpion? It appears that that is the more popular version of the story “often mis-attributed to Aesop” which has a variant known as “the farmer and the snake.” The songwriters obviously wanted to sex the tale up (a “tender woman” is a helluva lot more interesting than a farmer). As the frog and scorpion story (not to be confused with the “Frog and Peach” restaurant), it has had several dozen appearances in popular culture, the best of which has been and will forever be Orson’s telling in his very jumbled and uneven mystery pic Mr. Arkadin (aka Confidential Report,1955). Orson was god.

And totally off the topic of the fable and back onto the pop tune, turns out Al Wilson (who died back in 2008) was not a one-hit wonder by any means. He also gave us the indelible tune “Show and Tell”, and one I vividly remember from my childhood, “The La La Peace Song.” The song was also recorded around the same time by O.C. Smith, but the one I remember was the Wilson version. It’s gotta be the most upbeat song ever to mention racial injustice and skyjacking. Ah, the early Seventies…

FOOTNOTE: And who wrote "The Snake"? Oscar Brown, Jr., who had a very lively life as a singer, songwriter, playwright, poet, and civil rights activist. His Wiki bio can be found here. Nice pedigree for such a memorable tune.
Posted by Media Funhouse at 12:38 AM