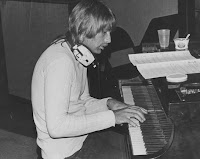 Keyboard player, guitarist, bassist, and arranger Larry Knechtel died this week at 69. He most recently worked with the Dixie Chicks, Neil Diamond, and Elvis Costello, but had accumulated an incredible body of work as a session musician. One of his first professional stints was as a member of the Rebels backing Duane Eddy (quite a nice beginning in rock ’n’ roll). Among his many, many accomplishments are being a member of the Seventies uber-pop group Bread and being the unseen bassist for the Doors (on their studio recordings — yeah, they neeed one from time to time).

Knechtel was a part of the incredible group of studio musicians dubbed the “Wrecking Crew” by drummer Hal Blaine, the performers who played on not just dozens but hundreds of pop hits during the Sixties — pretty much everything recorded on the West Coast that wasn’t done by a self-contained band like the Jefferson Airplane. Thus, Knechtel was part of the ensemble that backed Nat “King” Cole and Sinatra as well as the Beach Boys, the Mamas and Papas, the Fifth Dimension, and yes, the Monkees (all those other groups didn’t play their own instruments, so it actually wasn’t a shock at all to insiders that the Monkees didn’t play theirs). The ensemble are thought of primarily in connection with their amazing work with Phil Spector and Brian Wilson. Here’s a trailer for a forthcoming (or did it already go?) docu on the group:

A little round-up of clips presenting songs Wechtel played on that are essential to me, each in their own way. First, an obvious one, “Secret Agent,” Johnny Rivers:

“Classical Gas,” Mason Williams (which I deeply love and which makes me fly back to the world of my childhood):

A Monkees song people haven’t heard to distraction (and which has been left on Youtube — Warner Music has pillaged the site; as if it matters, guys, everyone has your music for free, anyway....). From the first LP, “Tomorrow’s Gonna Be Another Day”:

Knechtel played on the perfect “Pet Sounds.” “God Only Knows”:

Flipping forward to the Seventies and an AM staple that I can’t shake out of my head no matter how old I get, Sammy Johns, “Chevy Van”:

And even though he played piano and arranged “Bridge Over Troubled Water” for Simon and Garfunkel, and played bass for the Doors, I think he should be remembered for his fancy playin’ on this ditty if nothing else. A singularly Seventies-sounding record, Bread’s “Guitar Man”:

Posted by Media Funhouse at 2:39 AM