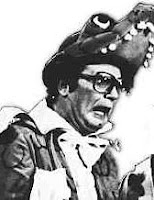 Filmation was the cartoon studio that produced low-budget-lookin’ product for Saturday mornings, most notably the “Archie”-related shows and the wonderful Fat Albert and the Cosby Kids. One helpful YT poster has given us clips from several of the lesser Filmation shows. Firstly, there’s an item called Uncle Croc’s Block from the 1975-76 Saturday morning TV season which featured Charles Nelson Reilly as a kiddie show host. The concept was that he was supposed to be bad, and the show was supposed to be corny. I think they got those parts right. Here Charles meets one of the great unheralded comics/character actors, Carl Ballantine, as “Sherlock Domes”:

Here’s Phyllis Diller, showing up as a witch:


Filmation snapped up the rights to some hit live-action TV shows and converted them into awful cartoons. They had a Mork and Mindy animated series, but here is the unbelievably awful-looking, time-traveling sci-fi Happy Days cartoon, narrated by none other than Wolfman Jack!

Since it will soon be Labor Day, we have to throw in Will the Real Jerry Lewis Please Stand Up? cartoon:

And finally, a series of specials that I remember as being halfway decent, even if they were an obvious ripoff of Fat Albert…: the “Clerow Wilson” series hosted by the real Clerow himself, Flip Wilson:

Posted by Media Funhouse at 2:00 AM

Well, actually...a close look at the "Clerow Wilson" clip shows that Filmation didn't make that one. Rather, it was made by De Patie-Freleng (DFE Films,) the "Pink Panther" studio; whose Saturday morning cartoons were usually pretty decent quality.