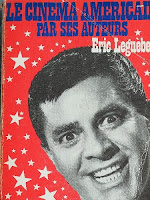 As the world mourns the passing of a guy (that Hughes dude) whose career started with fairly decent articles in National Lampoon, proceeded with some era-defining cute comedies (remember, the Eighties was the Empty Decade, kids), and then morphed into being involved with some seriously awful films (Dutch, Flubber, Beethoven, and the scarily atrocious Curly Sue), I sit around reading very rare translated articles from Cahiers du Cinema about the great American filmmakers, including le cineaste to the right (I'm so proud I own that book).

The location for this is the Blogspot of J.D. Copp, which can be found here. Copp has been translating from French to English lists, “thumbnail” director portraits, reviews, and snippets from interviews that appeared in Cahiers du Cinema in the magazine’s golden age (the Fifties and Sixties, when the staff was comprised of many fledgling filmmakers and wannabe auteurs). I found that the best way to review Copp’s blog is to simply move from page to page (read: month to month), but you can also use the search function atop his blog to search the names of certain directors who are discussed in the items he has translated.

One caveat: Copp’s mode of translation leans to the literal and in fact might be declared "stiff” in certain linguistic regards (sorry, I’m a copy editor by day, I notice this stuff). One could argue that he could be a little more liberal in terms of rewording the French text into truly smooth English, but the service he’s providing to those who don’t read French at all, or who can, but don’t have ready access to the Cahiers archives, is indeed invaluable. To add to the positive side of the ledger, he also translates passages from books he’s reading in French (thus far untranslated into English, obviously) that have anecdotes concerning the Cahiers “posse,” most notably Truffaut and Godard. 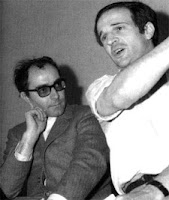 Copp’s specialty are the “best” lists compiled by the magazine, which included a special feature called the “Conseil des dix,” which found ten critics assigning critical “ratings” to the latest releases showing in Paris. Included were the “Glimmer Twins” of the nouvelle vague (right), as well as their many compatriots including Rohmer, Rivette, and Chabrol. In the process, Copp’s blog presents many oddball pairings of critic and subject, including this note from our fave, Uncle Jean (Godard), who was looking forward to seeing South Pacific:

Such is the opening of South Pacific from the Rodgers and Hammerstein operetta where Joshua Logan has redone these couplets in his own words. Apart from that, Todd-AO, six million dollars, the Hawaiian Islands, Mitzi Gaynor, Rossano Brazzi, John Kerr and under the paternal eye of Buddy Adler, introducing France Suyen [sic]. Doubt is not permitted, esthetically speaking, the next film of Joshua Logan will be colossal."

Copp’s blog also focuses a great deal of attention on Truffaut, who of course was the most radical critic of the New Wave group — therefore the head-scratching that occurs when one confronts the fact that his later films were like the ones he was raking over the coals in the Fifties. His original storyline for Godard’s A bout de souffle (Breathless) can be found here.

Copp has been doing posts that group together excerpts from Cahiers reviews of certain director’s work. Among these are Wilder, Wise, Wyler (no, no Welles yet), Mankiewicz, and even the critics’ fellow cineaste Alain Resnais. The two things that Copp has included that are invaluable for me especially are translations of Godard’s narration for his epic Histoire(s) du Cinema, which still doesn’t have a legal release in this country, because ALL the distributors are terrified of having to clear the clips Uncle Jean used without legal clearance. Copp’s translations of JLG’s cinematic poetry (the words, that is) begins here.

Oh, and yes, Copp has provided us with translations of excerpts from dozens of Cahiers reviews of the films of (you guessed this one, right?) Jerry Lewis —seen in the pic to the right, reading the magazine! I heavily recommend you check out Copp’s survey-post which can be found here.

But being a major fan of Joseph Levitch et son cinema (and that of Frank Tashlin, the man he arguably lifted his directorial style from), I must repeat some of the juicer passages here. In this case Copp’s literal translation produces some passages that appear as if they were made up by a humorist trying to prove a point about “the French and their love of Jerry Lewis” (my response to that one is always to remind the scoffer that they also loved Ford, Hitchcock, Ray, Fuller, Cassavetes, Altman, and Scorsese before we did):

Today, it is possible to define Lewis's character, yet, it is not possible to define the respective roles of the director, the actor and the character which he embodies. But is not the key to this universe precisely this division? And is not his visage, metaphorically, the mirror?

At the beginning, the Cahiers boys were not very kind, referring to Scared Stiff as containing the “usual clowning of two half-wits of American film.” The Money From Home review refers to Martin and Lewis as “a pair of nitwits even more nitwit than all the others.” A later Godard review of Hollywood or Bust found Uncle Jean proclaiming that “in 15 years [it will be seen] that The Girl Can't Help It functioned, in its time, meaning today (1957), as a fountain of youth where the cinema of now, meaning tomorrow (1972) drew a renewal of inspiration.”

The very curious review for The Ladies Man (which in French was titled “the Stud for these Ladies”) gets into what the reviewer calls “argument Lewis” (“argument for Lewis” or "the case of Lewis" would be a more liberal translation). The last sentences of the snippet Copp reproduces say “Yes, there is a depth to laughter but there is also a shame of laughter. From one to the next, the argument Lewis, to our mind, offers a good example.” I assume this means one should feel, by turns, deeply happy and full of shame watching a Jerry picture.

Other odd remarks include one about Visit to a Small Planet: “Ever since he has gone out on his own, Jerry Lewis no longer bases his films on homosexuality, but on powerlessness.” Whoa, baby. And of course there are the moments where the praise was incredible, as with a positive review of the unbelievably indulgent The Big Mouth: “The refinements of construction, the physical-metaphysical reach of the slightest gag, the tidal wave of madness which bowls over the dimensions of space, time and cinema, force us to dedicate a special issue to their analysis. The Big Mouth marks the center of gravity, the inevitable outcome of the previous films of Lewis.”

That's a far cry from the first review of a solo Jer movie, The Delicate Delinquent, which was one of many times the critics mentioned that Jerry was at his best when directed by Tashlin (which is definitely true): “With Tashlin absent, Dean Martin's partner is not the equal of Fernandel on his worst day.” Damn, that hurts.

Thanks to friend Paul for the discovery of Copp’s treasure trove of translation!
Posted by Media Funhouse at 1:26 AM