The Funhouse interview with Joe Sarno 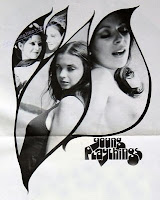 I’ve uploaded two short clips from my 1997 interview with low-budget softcore filmmaker Joseph W. Sarno, hereinafter referred to exclusively as “Joe,” since he is a very nice gentleman. I talked to Joe at the Chiller Theatre convention, where it was the intention of the Chiller folk to bring him together with both Russ Meyer (who did show up) and Radley Metzger (who came but turned around and left on the first night). I interviewed Meyer (a brief clip is on YT), and had the pleasure of first meeting Joe at the convention.

Joe’s memory was bit a hazy during the interview, but that’s understandable, as I was not only asking him about films that were anywhere from 25 to over 30 years old, but it should be noted that at one point during his most prolific period in the Sixties he was making up to six movies or so a year. Here he talks about his early work, which was bound up with the “swinging” and “swapping” crazes, in particular his Sin in the Suburbs (1964). Many folks have remarked on how Joe’s ultra-low-budget effort seems to prefigure Kubrick’s slightly higher-financed Eyes Wide Shut. Take a look:

The film was raved about in The Incredibly Strange Film Book, but has been very hard to obtain in the U.S. since the book was published in the Eighties. One bootleg copy has been circulated far and wide on wavery VHS, and that is the only one that I and most film fans have seen. Here is a clip from it, which I’ve uploaded to Daily Motion, since YouTube has a pathetic problem with the human body (being American-owned and run).