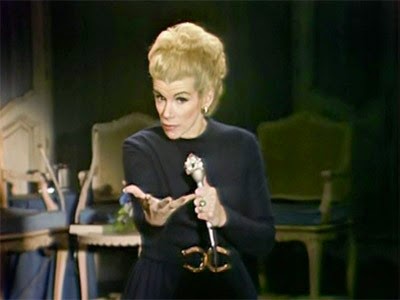 Rarely can I spontaneously connect my last two blog entries, but I will do it here, to discuss the “feud” that went on between Jerry Lewis and Joan Rivers a few months ago. In this instance, the juxtaposition of items found on the Internet proves that at least one thing Jerry Lewis said in his initial “salvo” was an outright lie on Jerry’s part (or a big-time memory lapse).

The first shot fired over the bow was the introduction of Rivers’ name when Jerry was being interviewed by Maria Menounos earlier this year on the occasion of an event to celebrate the 50th anniversary of the The Nutty Professor and the requisite DVD re-release of the film. Jerry brings up Rivers as the one person he hates, and he also notes he threatened in a letter to have her beaten up (rather odd thing to admit in public). Note that Jerry claims he never, ever met Joan Rivers in person:

Jerry’s furious remarks (which did come apropos of nothing) were responded to by Joan on Ron Bennington’s “Unmasked” show on Sirius satellite radio. She maintains that the trouble began when she did a guest shot on the telethon (and btw, when I first discovered this clip on Sept. 4, it was titled: "Joan Rivers: Jerry Lewis is a unfunny, stupid asshole"):

You can pick sides in that battle of words from angry old Jewish comedians, but there’s one thing for sure: not only did Joan do the telethon (by her own account), but Jerry met her when he guested on a daytime talk show she hosted at the end of the Sixties, produced by her husband Edgar, called That Show with Joan Rivers. The episode in question is available for free viewing on Hulu at the moment.

That Show (1968-69) was a Virginia Graham-style “girl talk” daytime talk program, in which Rivers had a topic of “interest to women” and a single celebrity guest who would comment on the topic. Jerry appeared on the episode about disciplining children (at that time his NBC variety show had been renewed for a second season).

At the 8:00 mark before the end of the program Jerry tells the audience about the time he spanked his son Gary (who he notes is in Vietnam at that moment). Jerry boasts that he used a western-style belt and “put a couple of welts on him.”


He then goes on to affirm what his youngest (disowned) son revealed in his controversial National Enquirer expose article — that Jerry had intercoms installed in every room of his house so he could hear what family members were saying about him. He notes that he turned on the one in Gary’s bedroom, that he “wanted to hear him cry, wanted him to get it out.” Instead, he heard his wife Patti comfort the boy and Gary told her “Daddy’s the only human being in the world who loves me.”

He further notes, to contradict the children’s behavior expert who is the other guest on the show, that when it comes to spanking and physically disciplining children “You have to start this at 4.” He also notes that he loathes Reform Judaism (this comes up out of the blue, but is in reference to a metaphor about how young people like things “easier”). 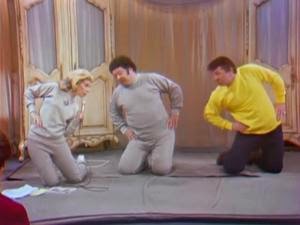 Three of the more intriguing shows feature Dick Cavett (about plastic surgery!), Shelley Berman (in a drearily-programmed show on gardening!), and this fascinating show with Lily Tomlin, in which two critics are asked to talk about "the stars of tomorrow."

This episode has Joan talking about what she knew best, show business, and mentioning how few "lady comics" there are. Also, she tells an interesting anecdote about how Woody Allen kept doing the same act word for word, until a critic called him out on it. Lily closes out the episode by doing one of her characters, a freakish cosmetics expert.

One show I had to watch immediately is an episode about perfume featuring Gena Rowlands (whom Joan refers to as “Geena” throughout). For a Cassavetes cultist like myself, hearing Faces referred to on a daytime woman’s chat show is surreal; even more surreal is the fact that Joan had the guest *only* discuss the topic at hand. Rivers wishes Gena good luck at the Oscars, the show having been shot while Rowlands was nominated for Best Actress for Shadows.

Thanks to Steve K. for passing on this discovery. Praise his “whole emotional fabric”!
Posted by Media Funhouse at 1:29 PM