Here's a cinema death that most American news outlets left out entirely, Gottfried John, 72. Like Richard Kiel, who died last week, John is best known to mainstream American viewers as a Bond villain (in Goldeneye), but, for international moviegoers, he will forever be most famous for his work with Fassbinder. Most particularly his very memorable turn as the villainous “Reinhold” in Berlin Alexanderplatz (1980).

John had an incredibly memorable face – one could almost say the phrase “character actor” was stamped on it. His filmography indicates that he played many likeable individuals, but Fassbinder explored his menacing side in both Alexanderplatz and In a Year With 13 Moons (1978). In both films he is the catalyst for the hero's behavior and the object of his romantic obsession.

For Fassbinder the key to understanding Alfred Doblin's novel Berlin Alexanderplatz was a short passage about the protagonist, Franz Biberkopf, dancing with his girlfriend but thinking of Reinhold. Thus, Reinhold becomes the central male character in Fassbinder's epic film besides our sad-sack hero Biberkopf, played by Gunther Lamprecht. John cannot be forgotten as the charming criminal who is the focus of Franz's hidden love.

There are few really good resources online (in English) for information about John, so I will include here the Fassbinder Foundation's official “farewell” statement, written by the head of the Foundation, celebrated film editor Juliane Lorenz. I have corrected a few small typos, but this is her statement on the passing of Gottfried John. Her obit begins in media res, with a description of John's memoir:

“Gottfried’s autobiographical novel, Bekenntnisse eines Unerzogenen (Confessions of an Ill-bred Individual), tells the story of a young man born during the Second World War who is taken away from his mother and grows up in children’s homes. His mother later kidnaps him and takes him to Paris, where they are able to live together for the first time – on the banks of the Seine, on an old barge, with little money. At the age of eighteen, the young man’s sole ambition is to become a film actor.

“His mother encourages him and they return to Berlin, where he takes acting lessons, performs his first stage roles and meets Hans Neuenfels, a young, highly talented theater director who casts him in leading roles. For the time being his dream of becoming a film star remains a distant goal. However, he takes his destiny into his own hands, applies to Bavaria Studios in Munich and soon after makes his first film, Jaider – The Lonely Hunter, which is screened at the Berlin Film Festival. 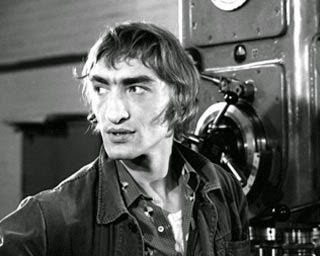 “There he is seen by Rainer Werner Fassbinder, who soon afterwards offers him the role of the toolmaker Jochen Epp in Eight Hours Are Not a Day (1972). They want to reach a TV audience of millions and make the world a better place to live in with their films. The Vietnam War is still raging; in West Germany the RAF is unsettling a stalled democracy. The unusual concept for a family series achieves high ratings.

“The series takes on cult status, making Gottfried John a star and launching a career that sees him soon become one of Fassbinder’s most distinctive actors. It is a career that reaches its highpoint with the role of the stuttering Reinhold Hoffmann in Berlin Alexanderplatz, a project that provides John, RWF and Günter Lamprecht as Franz Biberkopf with a distinguished place in film history.

“I met Gottfried in 1977 during the making of Despair, RWF’s first international film. Fassbinder’s fame and his films with John, the 'visage that brought him a lot of money,' as he later joked, increased the opportunities for this gentle, romantic and also highly intelligent man to pursue his profession abroad, above all in England, France, Italy and the USA, in films such as Goldeneye, Asterix and Obelix Take On Caesar and numerous other international film and TV productions – which raises the question as to where Gottfried John’s less well-known work can be seen. Wasn’t he also a star of German and European film – an actor comparable with Jean Gabin, Jean-Paul Belmondo and Gérard Depardieu?

“In Gottfried we have lost a friend, a seeker, an explorer, an observer. He died on 1 September 2014 in Utting outside Munich. We should endeavor to discover everything he has left to us.” – Juliane Maria Lorenz

There are numerous film and interview clips featuring John on YouTube, the problem for non-German-speakers being that very few have subtitles (including this beautiful-sounding reading of Rilke). By sheer coincidence, my most recent upload to that dreaded site was the “Arthouse directors reflect on Jerry Lewis” montage, which includes the “dance number” from In a Year..., in which Gottfried does a damned good Jerry Lewis impression (at 6:41):

His best known role, though, is Reinhold. Here is the French trailer for Berlin Alexanderplatz (much better than the British one that is also online):

And one poster posted a short, beautiful sliver of the final episode of Alexanderplatz, possibly the only scene in the miniseries where Reinhold appears to have let down his guard. Don't watch this if you don't want to “spoil” the final episode of Alexanderplatz – but, remember, that episode is a “dream” that includes many different variations and renditions of the Franz/Reinhold relationship.

Posted by Media Funhouse at 5:02 PM