When Joan tried to be Mel – “Rabbit Test” 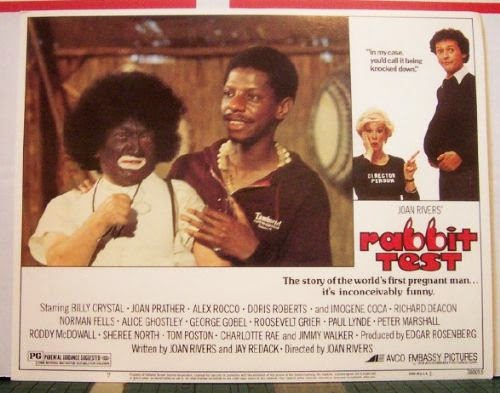 As could be expected, the death of Joan Rivers has led to many media outlets exploring and praising her five-decade career in standup comedy. Most of her obits are going to avoid discussion of the only film she made, and that's because it's an incredibly unfunny farce.

Rabbit Test (1978) is a pregnant man comedy (that's the one joke, right there, in those four words) that starred the young Billy Crystal and a host of Rivers' show-biz friends in walk-on roles. The film is an obvious attempt by Rivers to try and duplicate the success of Mel Brooks' gag-filled comedies. Rivers had in fact co-written a well-reviewed TV movie, The Girl Most Likely To... in 1973, the year before Brooks released his two biggest hits, Blazing Saddles and Young Frankenstein.

Joan took a cue from Mel and made her movie a Mad magazine-style comedy with wall-to-wall gags and kooky characters. The problem is that the gags aren't funny and, while nostalgia buffs will delight in the oh-so-Seventies cast of TV actors, most of the performers are present only to dispense with their two or three terrible gags.

The nearly unwatchable film has the look and feel (and most likely the budget) of a TV-movie, and the cast certainly reinforces that notion – one gets the feeling at points that Joan just asked whomever she was appearing with on Hollywood Squares to be in the following scene (this is definitely true of the moment where Peter Marshall is viewed on a TV screen doing joke dialogue on the Squares set).

You can view Joan in her sole cameo as a nurse at 47:30. I'm sure she bounced back from the failure of Rabbit Test, as she did from several other personal and professional difficulties. And although she relied on worn-out jokes and stupid gross-out and un-p.c. humor in the movie, she needn't have bothered – pregnant man comedies just don't work. Jacques Demy's A Slightly Pregnant Man (1973), starring Mastroianni and Deneuve, proved that five years before Rabbit Test.


If you want to avoid the agony of watching the full feature, check out this one clip I uploaded when Alice Ghostley died. It's the only the only laugh-out-loud moment in the film, and it comes courtesy of an encounter between Ghostley and the performer who “borrowed” her delivery and laugh, the inimitable Mr. Paul Lynde.