The lionization of Dick Clark since his death has fascinated me in that, while the guy was indeed a part of all of our childhoods, he wasn’t a particularly “warm” media personality. Oh sure, his Top 40 DJ voice was mellow and very pleasant to listen to, and he had the cleancut good looks of any era’s boy next door. But Dick Clark was a host and nothing more. Like Ryan Seacrest today, he was an anodyne presence who had no show-biz persona to speak of — he ushered kids onto a studio set to dance to records and he ushered contestants onto a studio set to play a game ripped off of Password.

I’d like to tackle two of the most interesting aspects of Dick Clark’s reputation: his much-vaunted connection to rock ’n’ roll and its later incarnations, and the completely specious assertion that he “broke the color barrier” on TV dance parties.

First of all, while I don’t adhere to the definition that Nick Tosches supplies in his excellent book Unsung Heroes of Rock ’n’ Roll — namely, that rock was dead by the time Elvis “broke” in ’56 — I would maintain that it was dying on the vine by 1958. At that point American Bandstand truly defined what remained of the cadaver — the new imitation Elvises (led by Fabian) and the pop starlets (epitomized by the always-forlorn Connie Francis — about whom, more later). 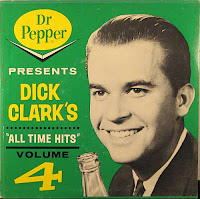 So Dick Clark became a “name” in American rock ’n’ roll by doing what was surely the cheapest fucking music show to ever air on a major network. Early on, when I was just a kid discovering the music of the Fifties through my mother, she distinguished for me between shows that had the performers playing live and the Dick Clark approach, which was pretty much ALWAYS (outside of his imitation Grammies, the American Music Awards) people lip-synching to their records — even if said records were several years (or several decades) old.

This was driven home for me by two events: a VH-1 all-weekend marathon of American Bandstand reruns in the early Nineties, and the explosion of YouTube as a hub for rare video clips. The former event found me feverishly taping the episodes and finding that, while they were historically interesting, they were almost without exception (save the legendary PiL appearance) a let-down, since the artists were always lip-synching and Dick’s interviews were useless pap.

In the second instance, I discovered a bunch of clips on YT that fans had put up from their bootleg collections that showed that Clark had indeed had on his shows an incredible roster of the great “lost” bands that made two or three albums in the Sixties and then disbanded (succumbing to internal friction and/or drug troubles).

But, again, the clips are wildly disappointing, since Clark was SUCH a cheap bastard throughout his career that even if the performer appeared on a primetime network show produced by him (as Captain Beefheart and the Magic Band did), they would be lip-synching to a fucking record. Here’s the Beefheart performance (read: lip-synch):

So, Clark could be hailed for having acts on AB that never appeared elsewhere on national TV, including Love, the 13th Floor Elevators, and the first version of the Magic Band. As examples of what made the bands special, the clips are mostly worthless — Clark's shows were the bookings a band would get if they couldn’t snag an Ed Sullivan or a Hollywood Palace or even an Andy Williams shot.

If you couldn’t get on the shows that had the artists perform live, you’d be on Dick Clark’s teen dance party, lip-synching to your record and answering dopey-ass questions from the “world’s oldest living teenager.” The official DC Productions channel on YT is in fact made up of nothing but these time-wasting chats.

The clips continue to appear and disappear from YouTube with some regularity (and if re-posted, have to be “disguised” from the search engine). Here’s Love guesting on AB. Watch ’em lip-synch because DC was one cheap bastard:

DC Productions also owns the libraries of several other rock-TV producers, including Murray the K — whose programs contained live performances and very interesting “concept” lip-synchs by the performers — and patrols YT and other clip-sites to make certain that footage isn’t seen as well.

The purpose of this trolling is to ensure that DCP cashes in on licensing for documentaries — where inevitably the footage looks great, but is, again, WILDLY disappointing in most every case. To illustrate that, here’s Dick saving dough again by having the 13th Floor Elevators lip-synch:

Now that I’ve dispensed with that aspect of the Dick Clark mythos, let me discuss his ubiquitousness on TV and the declaration that he “was a civil-rights pioneer,” a contention repeated a lot on the cable-news networks and conservative talk-radio (the latter kinda figures, doesn’t it, given Clark’s cleancut appearance and mediocrity as a music pundit).

Perhaps the single best tribute done to Clark, in terms of its kitschiness, was the Piers Morgan episode which brought back the previous owner of that timeslot, the one and only Larry King (whose ridiculously hagiographic tributes to dead people I loved to pieces, as I have noted in the past). Morgan asked Larry to weigh in on Clark’s importance (the primary question asked on these shows is “why would you say so-and-so was SO important…?”).

The other guests were an astounding roster of MOR pop people from different eras, all phoning in — Morgan’s show will have none of the wonderful (and eminently watchable) circus-like aspect of King’s show, where everyone talked at once on separate satellite feeds. Thus, Donny Osmond was heard at one point, Paul Anka at another, Gloria Estefan at another, and a member of the Commodores and another gent from a Nineties black boy band to perpetuate the “Dick loved black people” story at another.

The standout guest, though, was Connie Francis. I don’t want to mock Ms. Francis’ appearance or her physical condition — suffice it to say she does not look well and has clearly had a number of ailments in the last few years. Her contribution to the program was fascinating, in that I remember the supermarket tabloid stories that accompanied her breakdown several decades ago, in which it was noted she hired a hitman to kill the people she hated — her dad was right at the top of the list and Dick Clark was somewhere close below him!

As Connie spoke, you could hear that Morgan was getting antsy, because her paean to Dick was an elaboration of her problems in years past, and how Dick factored into them. First, she noted that she had been “involuntarily” committed to institutions 17 times, and Dick “pleaded with me” on bended knee to take her Lithium. Then she added that Dick himself committed her once (!). The story was getting SO harrowing that Morgan did indeed cut her off.

I remember the TV “comeback” appearance she mentioned at one point.  She appeared on Clark’s short-lived primetime variety show, which aired live in the mid-Seventies. Francis came out and sounded off-key, and was a sad echo of her former self.

She noted on the Piers Morgan show that Dick has assured her “you can just lip-synch to the records.” (That’s how an only moderately talented DJ becomes a iron-clad millionaire.) Connie said it took “200 takes” to get what she wound up lip-synching to.

What I got out of this accumulation of detail was that, yes, Dick Clark did encourage performers to come back to show business after their personal crises (Gloria Estefan noted he was very helpful to her after her bus crash in the Nineties), but even if they shouldn’t be appearing on stage. Ms. Francis is a tragic and heroic figure for all the stuff she’s gone through in her life — and one gets the feeling that she would have been much better off if “friends” like Clark had left her alone to simply get well.

On a related note, a New York Times piece by Stephen Holden that appeared on Friday quoted documentarian Shawn Swords as saying that Clark “‘an alpha villain’ whose kingdom was ‘built on ill-gotten gains.’ In exchange for exposure on the air singers were expected to sign away their copyrights and all future royalties…. ‘I really think the man’s place in pop music history needs to be re-evaluated.’ ” Holden notes that “such things were common practice in the music business at the time.” But should we be saluting a guy involved in such practices?

Then there is the “civil rights pioneer” label. I have read different articles over the years addressing the matter of whether Clark integrated his teen dancers on AB. The truth is that he did it only when he had to. This important Philly Post article by Tim Whitaker spotlights research that professor Matt Delmont did for his book The Nicest Kids in Town: American Bandstand, Rock ’n’ Roll and the Struggle for Civil Rights in 1950s Philadelphia.

The article refers to Delmont’s discovery that Clark’s claim of early integration on AB was a myth concocted in the Seventies when Clark’s hoary old vehicle was getting its ass kicked by Soul Train in the ratings. Black teens were in fact turned away from the AB for the flimsiest of reasons, and there was in fact no integration (until, of course, it was more socially acceptable years later).

So Clark wasn’t the kind of truly influential and innovative music TV producer that Ed Sullivan, Don Kirshner, or even Burt Sugarman (The Midnight Special) were, nor was he a “civil-rights pioneer.” Add to these myths the vanity-move he made when he decided to continue appearing on his feeble New Years Eve show (which was annually taped in summer, except for Clark’s countdown in Times Square) well after his stroke and recovery. 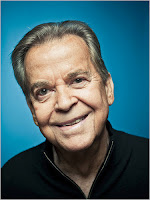 I do believe that people who have suffered debilitating strokes and other horrible health dilemmas should continue to work in the public arena, but Clark’s decision reeked of unabashed vanity — as did the plastic surgery that he appeared to have had to make his face resemble his earlier “world’s oldest teenager” look.

You see, there was no time after the late Fifties when he wasn’t on TV, and even though the programs were thin wisps of nothing (there’s not much overhead on a bloopers show, is there?), he continued to hang around the dial as he raked in millions. The notion of him retiring was untenable, even when he really needed to exit the public stage, since he had nothing to contribute, except to note he was still among us.

Thus, when the tributes came thick and heavy and the empty plaudits started racking up from folks who were attached not to memories of Clark but to the comforting feel of their own youth, I felt it necessary to write a Deceased Artiste about a person whose work I watched a helluva lot when I was young, but for whom I developed a deep aversion as I got older.

I will give DC one piece of praise: he was a fine game show host. Game show hosts can be brilliant (witness John Daly) or witty (Steve Allen) or just utterly charming (Garry Moore, Allen Ludden, Bill Cullen), but they don’t really need to be. Dick Clark was a great choice to host the COMPLETE ripoff of Password that was the [fill in the money amount] Pyramid. A nice voice and cleancut looks are excellent on a gameshow.

And if there was ever a fire or weather incident in DC Productions, the staff should rush out a tape of THIS performance, the *only* spontaneous moment in the history of American Bandstand, the aforementioned appearance by PiL: