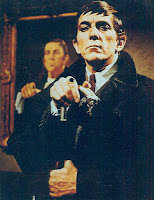 Too many talented folk are kicking off, and what I really want to do are tributes to some wonderful filmmakers who died recently. But since the departures are happening faster and furiouser, I’ll address the most "obvious" deaths — namely the three talented people who left this mortal coil in the last week. (No, not Dick Clark. He'll get his own entry, and I ain’t deemin’ him talented.)

We start out of, course, with Levon Helm of the Band. Other folks will do more complete tributes (while still others will simply write subtle and touching comments to adorn the YT vids of his work), so I’ll just go with the most obvious oldie that never wears too thin. (I’ve always loved the oddball reference to Spike Jones — who never sang, but did talk.) Oh, the wonders that were accomplished by “Marty DiBergi” back in those coke-fueled days:

and one TV appearance, backing his movie “daughter” Sissy Spacek on The Midnight Special.

The second member of the troika was William Finley, who was best known for acting in films by his friend Brian De Palma. He did have a handful of other roles (including a pair of performances in forgotten Tobe Hooper movies), and I do remember seeing him on The Joe Franklin Show promoting his mid-Eighties book on the sport of “Racewalking," but, yes, whenever, he is remembered, it will be for the films with De Palma.

He met De Palma at Columbia University, and worked on his shorts Woton’s Wake and Murder a La Mod (as an actor in both, and a set designer in the former). The first feature in which he had a prominent role — a really prominent role — was Dionysus in ’69 (1970). Finley plays the title role in a production by the Performance Group of The Bacchae, and gets to end the film on the up note, “A vote for Finley in ’68 will bring you Dionysus in ’69!" See the whole movie here.

Finley’s next memorable appearance in a De Palma film came in the wonderfully entertaining Hitchcockian nightmare Sisters (1973). Finley’s most significant scene is here, but you can watch the whole film below.

Finley’s finest hour, one which has enshrined him as a cult icon of sorts (in a very imaginatively designed super-villain outfit), was his performance as Winslow Leach, “the Phantom of the Paradise.” Finley is just terrific in the movie, lending a high-melodramatic note to his performance and contributing to the overall comic-book effect of the piece. 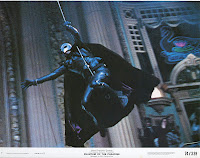 I have declared my devotion to Phantom on the Funhouse TV show, and recently wrote here about how Twentieth-Century Fox “blocked” a clip on YouTube of my interview with Phantom costar Gerrit Graham, because it included a 50-second clip from the film.

So, I suggest, if you haven’t seen Phantom, you check it out ASAP. It seems *whole chunks* have been up for nearly two years. Here is the opening:

And another sizeable bit that includes the brilliant horror-rock sequences (that are post-Alice and decidedly pre-KISS):

I will set aside the grumbles at Fox and say farewell to Finley, whose gawky, haunted performance in that film will keep him alive for a long, long time to come.
******

And speaking of haunted horror figures, we just learned yesterday of the death of the actor who incarnated the first “guilty vampire,” Barnabas Collins himself, Jonathan Frid.

I outlined my utter love for Frid’s characterization at length in an entry I wrote about Dark Shadows this past Halloween. But now for the inevitable obit: Frid was a classically-trained stage actor from Canada who was never quite at ease with playing a vampire on a daytime soap — which, of course, worked perfectly for Barnabas’ haunted quality.

He was both a master ham and a performer who was able to carry off very emotionally complicated scenes. Sometimes he did this by confounding his fellow actors with his own made-up lines (my personal favorite “bloopers” on the show were when Frid did this, and you saw the look of dismay in his fellow actor’s face).

He did, however, look incredibly cool and regal as Barnabas and created a completely iconic character, who truly is important in the history of horror/fantasy. Barnabas was a cursed bloodsucker who time-traveled with ease (and Dr. Julia Hoffman), and constantly was in the throes of yet another dilemma.

I salute Frid for having embraced in his final years the role he was eager to shed — in the final months of the show he told Dan Curtis he would stay, but would no longer play Barnabas (thus, an odd storyline cribbed from Wuthering Heights, in which he was “Bramwell Collins”). However, odd (or just downright goofy) the new Tim Burton DS feature turns out to be, it can’t erase memories of Frid in his cloaked finery as Barnabas. He was one of the coolest vampires ever. 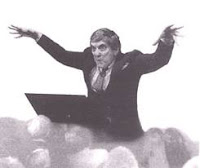 I linked to several great DS clips in my Halloween entry (some of which went down in the interim — I knew that fan wasn’t going to be able to post on YT the entire run of the series as he/she planned….). Herewith an equally nice sampling, but before I get to the embeds, I offer you Mr. Frid’s own site, a fan’s posting of rare DS photos, and a solid collection of Frid’s dramatic soliloquies on DS

The fan-generated material on DS is fascinating, as with this person’s “annotated” storylines from the show. Herewith, the relationship between Barnabas and his very own Renfield, Willie Loomis (John Karlen):

Frid on The Merv Griffin Show at the height of his fame:

Frid guests on the extremely corny time-capsule game show The Generation Gap. Prepare for your mind to be blown:

On to a pair of non-Barnabas clips, which I uploaded to YT a few years back. First, a wonderful Frid blooper that Oliver Stone kept in his debut feature, Seizure (1974). The film is, to put it plainly, kinda nuts. 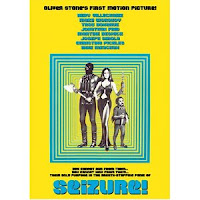 Frid plays a writer whose creations (a dwarf, played by Herve Villechaize, a “queen of evil,” played by the always sexy Martine Beswicke, and an African-American giant) come to life and try to kill the guests he’s invited over for the weekend. I spoke to Frid about the film briefly at a DS convention, and he said it was terrible, Oliver Stone was a horribly un-subtle director (he felt the same way about Dan Curtis, incidentally — check out the over-the-topness of the House of Dark Shadows feature.

Perhaps he was sorta mad that Stone used his haunted (and sometimes bewildered) quality so acutely in his first (admittedly very sleazy) feature. Here is the blooper that was left in the film — it is a gem:

Seizure does work on a very odd sleazy level. Perhaps one of its weirdest scenes not involving Herve Villechaize is this forced knife duel between Frid and the very sexy young Mary Woronov:

Now, I turn to prime Dark Shadows. First, the kitschy side, with the bloopers that are extremely amusing but all the more so because each one of them actually aired on the show. DS was a very low-budget production, and so they rarely did retakes — unless Frid began to curse (but more about that when I finally get around to posting a clip from my interview with the show’s costar Kathryn Leigh Scott). Thus, a LOT of odd moments were broadcast as part of the show:

Fan-created videos are of course the bulk of the DS tributes on YT (now that MPI has indeed pulled down the posters who were attempting to put the entire DVD library up on the site). There are fan-made music videos like “The Return of Barnabas Collins,” but nothing quite compares to the serious “meller” quality of the music-vids created by an engineer here in NYC when the show ran on public television.

They perfectly capture the mixture of emotions that DS provoked during its initial run and still can provoke today: an amusement at its highly melodramatic tone and also a fascination for its very tightly scripted (and yes, quite well-acted, under the *no-budget* circumstances) storylines.

Farewell and thanks a lot, Mr. Frid. You were an indelible presence on daytime TV. I only hope that the coffin isn't chained like last time. Willie should be along any minute now to let you out.... (Couldn't resist.)
Posted by Media Funhouse at 7:09 PM