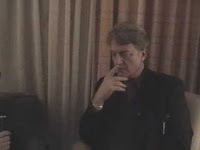 I received a notification the other day from YouTube telling me that one of my videos had been “blocked” by a copyright holder. Not taken down, mind you, but blocked (what that means I discuss below). The clip in question is from my interview with Gerrit Graham, which concludes with a 50-second snippet from Phantom of the Paradise, illustrating what we’d been talking about in the interview.

The clip clearly serves as a promotion for the movie, which Fox released on DVD a few years back. Whoever trolls on YT for that company didn’t feel that way, though, and that makes for some serious stupidity. What makes the situation even sillier is, again, the fact that they didn’t have the clip taken down, just blocked — which means if you already have the URL you can view it, but it can’t be searched for in the site’s search engine, and if you go to the mediafunhouse channel (where it is still visible), you cannot click through to see it.

This is of course much ado about nothing. But Fox does like to make this kind of trouble — a previous notification from YT informed that the company had made note of my using a clip from The Panic in Needle Park in a clip from my interview with Jerry Schatzberg. In that clip the claim was patently ridiculous, since the footage was overlaid onto Schatzberg talking about the film — thus, as I called it in the clip description, “the audio commentary that never was.” Thus the studio was all right with it remaining on the site. Goddamn, glad you were, guys, the fucking thing only serves to draw attention to a movie you released on DVD, but pretty much "buried" in the process.

This “burying” by Fox of their cult items is fascinating. The many fans of Phantom of the Paradise — 24,000 (!) of whom have watched my Graham interview clip to date — are well aware that the U.S. DVD release of the film contains no extras, whereas the French two-disc release has a host of wonderful supplements, including a full-length featurette that includes comments from all of the key participants, including De Palma.

The fact that Fox hasn’t seen fit to acquire and release these extras (which are, natch, in English) in the U.S. speaks to the fact that they really don't care much at all about the film. In the meantime, here is the contested clip, which can indeed be linked to in a blog. You are outta your ever-lovin’ mind, Fox bean-counters!

UPDATE: I re-upped the clip, minus the "offending" footage:

Posted by Media Funhouse at 5:47 PM

Put it up on another site? I'd love to see it.