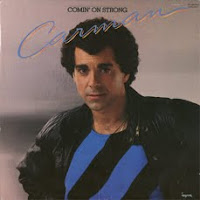 Every year at Easter I feature an exploration of Christian kitsch on the Funhouse TV show. There are certain favorite subjects of fascination, and one of those is most certainly Carman. He is a mono-monikered Italian-American gent from NJ who has recorded music in every conceivable modern-day pop genre and created music videos that basically reproduce all the tenets (read: visual and editing tropes, and clichés) of each of the genres.

I’ll spotlight a mere three jawdroppers here. The first is solid slice of Nineties white-boy rap executed with the Xtian boy band DC Talk. It’s hard to pick my favorite gonzo line from Carman’s lyrics, but I think one of the finalists would have to be “Praise the Lord with your feet!”

Carman’s appropriation of pop-culture tropes is fascinating, and nowhere is this better illustrated than in his Xtian Western video(!). The clip is fascinating for several reasons, among them the fact that different classic Western themes (The Magnificent Seven, Bonanza and Wild, Wild West themes) were licensed for the video.

He also deftly blows away not only the notion of alcoholism, but also "false" religions (which include major world faiths — whaddya think that guy in the turban represents?). The melody is snatched from "Ghost Riders in the Sky":

And the oddest little item Carman ever cranked out is surely his weird “SLAM” video, which combines comic book imagery, A Clockwork Orange, the Batman TV show, and that goofy-ass synchronized Rhythm Nation dancing that was so popular in Nineties music-vids.

Yes… he is that Christian that hell warned you about! Carman is one strange and enthusiastic music-video maker. May we explore him for several Paschal seasons to come….
Posted by Media Funhouse at 9:08 PM