The bond between the great radio voices and their audience is a direct one and, oddly enough (given the spatial disconnect), a very emotional one. Free-form FM legend Pete Fornatale created such a bond in his work, whether he was playing music he deeply loved, or stuff that was on the dreaded “playlist.” Like many of the free-form folk who are still with us, Pete also served the function of “curator” of pop-rock culture, teaching, writing books, giving lectures (that were suitably free-form), and trying to keep alive the enthusiasm for music that is now enshrined either as “oldies” or (BAH) “classic rock” while still exploring the work of new folkies and rockers.

Pete’s obits and the tributes from his colleagues at his station, WFUV, all stressed that the guy spent his whole life in his chosen profession — he started as a DJ at his college radio station (which, coincidentally, was the very same FUV) in the mid-Sixties, and then was lucky enough to score a berth at NYC’s leading FM rock station, WNEW-FM, forging a long association that seemed to have contained a lot of his happiest moments and some of the most regrettable (enter: the playlist!).

My own relationship to Pete’s work on radio was somewhat spotty: I noticed in listening to the airchecks that are on the Net that the reason I probably fell away from listening to him and a few other NEW DJs as an adolescent was that I wasn’t into the “arena rock” acts that were emphasized on the station by the late Seventies. I always had (and will always have) a special connection to that incredible air-staff (Allison Steele, Muni, Fornatale, Elsas, Scelsa), but that “dinosaur music” (as I thought of it then, and still sorta do) was being washed away in my mind by new wave and punk.

In researching this piece, it was thus a pleasure to discover the moment in 1982 that Pete created “Mixed Bag,” his nearly 30-year radio show featuring the music he really loved — folk, folk-rock, and basically any quality rock and popular music that fit into his episodic “themes.” This show ran on early Sunday morning (basically the only time he had found when the tightly-playlisted stations he worked at would leave him alone), so I wasn’t hearing Pete for some years (late sleeper that I am).

On the return to WFUV, with his friends and fellow free-form legends Dennis Elsas and Vin Sclesa (who have both followed their own interesting trajectories over the years), it was a joy to hear Pete go off on his audio reveries. In its most recent incarnation, “Mixed Bag” was a fascinating, at times nearly OCD (but very listenable!), exploration of themes or concepts in music. One thing made me have infinite respect for Pete: the fact that, no matter how “out of fashion” an artist was, Pete continued to play them if he loved their music. 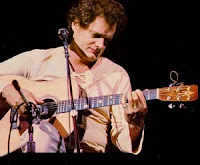 Such was the case with Harry Chapin, one of the artists whose work I dearly love, but even I haven’t paid tribute to on this blog or the Funhouse TV show (not because he’s “disapproved of,” but because no new material has emerged and I’ve been distracted by the million other artists whose work has popped up on this rabbit-hole called the Internet). Pete, however, regularly played Harry, and now that he’s gone, I wonder if anyone else will continue to spin those gorgeous and moving story-songs that Chapin made a specialty of.

Speaking of Chapin, Fornatale was not just a DJ who talked the talk — he was a “child of the Sixties” who still made charity a priority, doing dedicated work for the organization Harry created called WHYHunger. Here Pete is introducing a documentary on the Occupy Wall Street Movement this past December at the Paley Center in NYC:
It’s hard to convey what is special about any great radio personality (I had this trouble trying to sum up what Lynn Samuels did in my Deceased Artiste tribute to her). The best way to experience his work is to go to the the NY Radio Archive site, which has a number of recordings of Pete’s great moments available as free MP3 downloads, including:
— an extremely early 1969 fill-in slot, where Pete discusses whether the Jerry Lewis telethon is “legit” or not (fascinating!).
— a gorgeous 1977 interview with Brian Wilson in full “Landy mode.” The interview is particularly touching because Pete tells him at two points how much Pet Sounds and the Beach Boys’ music has meant to him. He also tells Brian how much he is loved, which is particularly moving (given that I saw Brian on Larry King a few years back, and he is still haunted by being what he calls “a bad man”).
— a 1977 segment which, as noted above, reminded me how codified WNEW became as the Seventies wore on. Too much arena- and classic-rock (Yes, Pink Floyd, Santana, Chicago). Perhaps the only song that I loved then and still love is “Time Has Come Today,” which was of course an “oldie” by ’77. You do get to hear Pete playing a tape of the ad he did for the Woodstock festival back in ’69, which is amazing.

— the first “Mixed Bag” from 1982. Utterly invaluable, as it includes a “presentation tape” (that’s what Pete calls it) that was used to sell the idea to WNEW’s management. The first song is Chapin’s “Remember When the Music,” and the first guest is Don McLean, who sounds oddly angry for such a wonderfully sensitive singer-songwriter. The piece de resistance is that Pete’s first themed set is geared to the holidays — he does a set on the topic of loneliness.
—a 2003 clip where Pete plays 1996 interviews with himself and Jonathan Schwartz (the mellow-voiced DJ who always makes me think of Robert Klein’s exquisite parody of him). Schwartz discusses the radio “experts” called in to retool WNEW in the late Seventies, and Pete also weighs in on his growing disillusionment with the station.

In that interview, Pete discusses his friendship with Harry Chapin (how the two met when Pete picked up Harry when he was hitchhiking in Long Island during the Sixties) and digs out the oft-repeated story about how one of his first fan letters for “Mixed Bag” was a note commending him, but noting there were lots of new Eighties folkies who needed airplay (the note was from a then-unsigned Suzanne Vegas). Find this aircheck and many more at the NY Radio Archive.
Now, since this blog is more visually oriented, here are some clips that show different sides of Pete. First some audio of he and Dennis Elsas on WNEW in 1983. Here is rare documentary footage of the station, with some vintage Pete in the middle:
A very odd item, a video docu called “How Audio Recordings are Made” featuring the group The Washington Squares, hosted by a very nerdy-looking Pete!
Pete had a literal who’s-who of singer-songwriters and folkies on his different radio shows. One of the people he said he was proudest to host is the “Old Folkie” himself (thanks, Harry), Mr. Pete Seeger. Here Pete introduces Seeger at the Lone Star in 1985 and here he is interviewing Seeger, Jim Brown (no, no that one), and Roger McGuinn in 2007:
Proving that Pete was a very good interviewer, here’s a rare chat with Leonard Cohen from April 28, 1985, fortunately preserved by a fan. Caught in the morning (and sounding somewhat burnt), Leonard is incredibly honest and funny, sings “Night Comes On” and reads poetry from his Book of Mercy:
Finally, acknowledging Pete’s other “professions,” here he is lecturing on the subject of Woodstock at Queensborough Community College. “Lecturing” is a poor word to capture what he did with an audience — he clearly drew on his years teaching high school English to captivate an audience and, most importantly (this guy clearly remembered what school was like), to keep them awake! (Watch his techniques here to involve the audience, but also to “swerve” things just when they seem to be reaching a mellower tone.)

The last time I saw him host an event, it was a tribute to the Bottom Line at the World Financial Center in the summer of 2011 (or was it 2010?). His sense of enthusiasm was truly infectious, and he did work to keep the audience engaged in a live venue — this was indeed interesting to me, having grown up on the mellower, slow-talking, somewhat nerdy-sounding, older-brotherly DJ voice he used on the radio (no AM Top 40 “puker” was he).

What was most important, though, at that show — as he lamented the loss of that sadly long-gone NYC nightspot that hosted all the non-arena/concert-hall performers who counted in the Seventies and Eighties — and in the clip below is how much he loved talking about this stuff:
Pete was one of the last of a dying breed. Thankfully, in the NYC area, we still have free-form radio legends Bob Fass, Vin Sclesa, and Dennis Elsas not only still with us, but also still on the air on a weekly basis (Elsas is on every weekday on WFUV). We should acknowledge their contribution and treasure it while we still have them.
Posted by Media Funhouse at 3:40 PM