June 10th of next month will mark the 30th anniversary of Rainer Werner Fassbinder’s death. While it seems that Fassbinder’s immense artistic achievement (over a short period of 13 years) will forever remain "a Mount Everest of modern cinema" (to quote Sarris' comment about Berlin Alexanderplatz), any regular viewer of his work feels as if they “know” his ensemble of actors, each of whom portrayed a few dozen different characters. Gunther Kaufmann, who died last week at 64, was one of the few actors whom Fassbinder envisioned primarily as two sorts of characters — friendly American soldiers and gangsters’ henchmen. 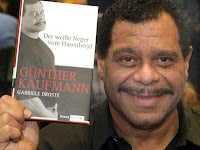 Kaufmann had an amazingly active and complicated life. He was born in Munich of a German mother and an African-American soldier father, and grew up in the Munich suburb of Hasenberg — he was nicknamed “the Bavarian Negro” during his career, and called his autobiography The White Negro from Hasenberg! (above). He served in the Navy and then supported himself doing small jobs, until he was cast in Volker Schlondorff’s Baal (1970), which starred Fassbinder.

Although Kaufmann was a married man, he had a relationship with Fassbinder while the young tyro director was making his first features. He first appeared in RWF’s Gods of the Plague (1969) and went on to be in 13 more of Fassbinder’s film and TV projects. He was a burly gentleman who did “look American,” thus his being cast as henchmen and American soldiers — although Fassbinder did give him a wild starring role in Whity (1970) and wrote a terrific supporting role for him as a confused terrorist in The Third Generation (1979).

Like a few of Fassbinder’s actors, he had a bit of trouble finding roles after the director’s sudden death and journeyed to Portugal for a time. He did eventually get back into the German film and TV industry, and worked regularly for decades until he was involved in a real-life situation that was indeed worthy of a melodrama by his old friend.

In 2002, he confessed to the murder of his accountant, whom he claimed he had fallen on while the two were having a physical altercation (as noted, Kaufmann was a big guy). It turned out that Kaufmann’s confession was false, intended to shield his wife, who was dying of cancer and was also a likely suspect for the murder (it is reported on the Net that they had been defrauding the accountant in order to pay for Mrs. Kaufmann’s cancer treatment).

The murder was declared an accident, and Kaufmann was sentenced to over a year of prison time for blackmail and robbery. In 2005, it came to light that his wife had indeed been involved in the murder — she had hired three men who were the actual killers of the accountant, unbeknownst to Kaufmann (which does indeed add to the melodramatic circumstances). Kaufman received a fine and a probation sentence for his phony confession and was released from prison in 2005.

His comeback in show business was very strong, as he again was able to play supporting parts in all kinds of movie and TV productions, including this all-too-cute kids movie about a girl adventurer, titled “Vicky the Viking” in English (not that it ever really came out here):

Kaufman died unexpectedly of heart failure at the point where he was preparing to act in a film based on his autobiography, to be called “God’s Second League” (thanks to the obit on the Fassbinder Foundation site for that tidbit)

He will forever be remembered by filmgoers around the world (including Americans, for whom he represented an unusual sort of “surrogate”) for his acting in the films of Fassbinder. As noted above, one of his best parts came in the very “busy” and incredibly prophetic satire of terrorism The Third Generation, in which he donned both blackface for the “caper” and “aged” makeup for a later sequence.

This is the film that contained ALL of Fassbinder’s players (well, nearly all) and although this trailer isn’t subtitled you’ll be able to understand it. The key point the film makes is that terrorists are a necessary element for capitalist society — capitalists in fact *need* their behavior to justify cracking down on human rights. That message will never be dated. 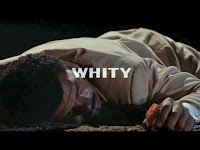 The best way to close out an obit for for Kaufmann, however, is to spotlight his singing, which was showcased in three of RWF’s films. He sang the opening theme song for Whity, in which his servant character summarizes the plot of the film (he will kill the family he works for, member by member).

His “best” song is, no question, “So Much Tenderness” (written by the inimitable Peer Raben and Fassbinder), which closes out The American Soldier in a grand and bizarre fashion — as a slow-motion scene plays on and on, making audience members laugh then squirm, then laugh and squirm again. Both songs are included in this tribute to the music of Peer Raben, which I created and uploaded to YT upon Raben’s death (the Whity theme is right at the beginning, and “So Much Tenderness” starts around the 2:00 mark):

He also sang a song for the soundtrack of Fassbinder’s last film, Querelle (1982), “Young and Joyful Bandit”:

Posted by Media Funhouse at 4:52 PM