"A riot is an ugly thing!": Deceased Artiste Kenneth Mars 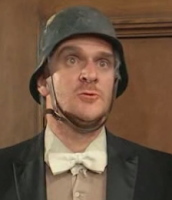 Show biz folks die all the time, but it does seem like a lot of people whose work I really loved are dying these days. I was introduced to the brilliance of stalwart comic actor Kenneth Mars by my dad, who would tell me of the wonders of The Producers before I finally got to see it and memorize it (the recent-vintage musical remake is an abomination I won’t even comment on).

Mars did play normal characters quite often (he was the dad in a Molly Ringwald comedy, fer chrissakes), including a lead part in a Frank Gilroy picture I’ve yet to catch up to, Desperate Characters with Shirley MacLaine (1971). But it’s for his absolutely brilliant comic turns he’ll be remembered, most especially the two for Mel Brooks (see below).

In reading Mars’ obits, I became aware of how much work he did as a voice talent for cartoons. It makes perfect sense — in his best comic performances, he was most definitely cartoonlike but played the characters with a sincerity that was gorgeous (and made the characters even funnier). Besides his prolific work on sitcoms, I want to point to two of his performances that absolutely blew me away.

The first is in the overambitious and sadly underwhelming Woody Allen film Shadows and Fog (1991). The film, Woody’s last for Orion Pictures, is his homage to German Expressionist silents and also the work of Franz Kafka. It is a confused picture that has way, way, way too many celebrities in supporting roles and cameos (it could be seen as the Expressionist Mad, Mad, Mad World) — John Malkovich, Madonna (who received prime placement in the Spanish poster, as you can see on the right, although she’s barely in the picture), Jodie Foster, Kathy Bates, Donald Pleasence, John Cusack, David Ogden Stiers, Philip Bosco, Fred Gwynne, Kate Nelligan, Wallace Shawn, William H. Macy, and of course Woody’s main squeeze at the time, who now threatens to sue if her clips are shown in documentaries about him.

The film doesn’t wind up working well as an Expressionist update or as a Kafka-esque comedy. Kenneth Mars shows up at the film’s end as a magician in a circus that Woody has run to, in order to escape a killer. Mars proceeds, with a beautifully understated performance that seems intended to evoke Bergman actor Erland Josephson, to steal the entire movie. I was already a firm fan of Mars’ when I saw the film upon its initial release, but I was very impressed that a really talented character actor could just steal an entire film away from its unnecessarily star-studded cast. Someone has posted the entire film on YT, here is the very end: 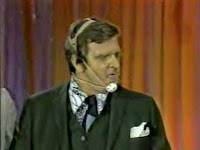 The other Mars performance that is indelible for me is his semi-regular work as William W.D. “Bud” Prize on the terrific Fernwood 2-Night and its follow-up program America 2-Night. In that character, Mars achieved something quite unique: he actually made hardcore deadpan comic actors Martin Mull and Fred Willard break up. Unfortunately, the scene in question isn’t on YouTube, but it occurred when “Bud” Prize began to lecture “Barth Gimble” (Mull) and “Jerry Hubbard” (Willard) about why parents shouldn’t let their children transform themselves into pirates. The show was written by brilliant comedy writers, but one could see that Mull and Willard were always “sweetening” their bits with toss-off lines. Mars was the only guest I can remember whose riffing got Mull and Willard to smile broadly on camera (and Mull to hide his face behind a prop, so as not to be seen laughing).

As for clips of Mars, I offer a late Sixties Prell ad he appeared in:

And, from around the same time, the charming low-key sitcom He and She with Richard Benjamin and Paula Prentiss. Mars played their Greek fireman neighbor:

Kenny’s introductory sequence in The Producers ranks among the funniest scenes ever. Ever!

An outtake from Young Frankenstein that introduces his Inspector character:

And the classic “a riot is an ugly thing!” bit:

The best for last: Mars as “ambassador-at-large for the Fernwood Chamber of Commerce” William W.D. “Bud” Prize on Fernwood 2-Night. Here he talks to Barth and Jerry about his environmental preservation (which he calls “conservatage”) and his terminal underbite:

Bud Prize debates “Sylvia Miller” (Fannie Flagg) on whether or not she’s having sex with aliens. He also discusses his mentor and “chin-odontist,” the great Cletus Emmett Wheelwelker (Fernwood 2-Night was so goddamned good for several reasons, among them the fact that even the smallest characters had a demented back story):

Bud Prize came back on America 2-Night as Barth’s “interview coordinator.” Here he presents in the flesh the great aviatrix Amelia Earhart… kinda: