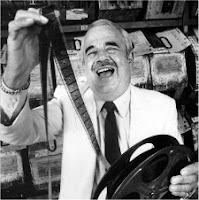 Dave Friedman was a very amiable gent whom I had the distinct pleasure of interviewing twice. He will go down in history as the last of the old-fashioned, road-tested exploitation producers. He learned at the hands of a master (Kroger Babb), created with Herschell Gordon Lewis the gore movie, made some very dippy nudie-cutie pics with HGL, wrote a great memoir (A Youth in Babylon), and gave us some of the best-ever trailers for softcore pics in the Sixties. He of course also made features to go with these trailers, but they very often (with one or two exceptions) were much less entertaining than the trailers were.

Here is a classic Friedman trailer for his “roughie,” The Defilers:


Another great one that reflects beautifully Friedman's attitude toward softcore. A free i.d./password for Daily Motion might be required to view this one, but you should have one of those anyway (Daily Motion is a YouTube with no squeamishness about the unclad body):


I thought I had put up the “carnival pitch” clip from my first interview with Mr. Friedman (who did insist on being called “Dave,” as noted in his New York Times obit), but I evidently never did. I will rectify that in the near future. In the meantime, I offer this great bit from my second interview where Dave just laid it on the line about his profession.

The man was a delight to talk to. His trailers may have indeed been better than his films, but I can vouch for the fact that talking to the guy was FAR more entertaining than watching either. He was an extremely friendly legend.

Posted by Media Funhouse at 1:05 AM